The Financial Transparency Coalition (FTC) is a global coalition of organizations, working to curtail illicit financial flows through the promotion of a transparent, accountable, and sustainable financial system that works for everyone. Founded in 2009 under the name of the Task Force on Financial Integrity and Economic Development, the FTC and its members have successfully mobilized governments and citizens to take action against illicit financial flows, while advocating for a more transparent financial system to better serve financing for development. The coalition uses its wide reach and expertise to influence global norms and standards for financial transparency, and close loopholes in the global financial system. Key issues for the FTC are country by country reporting; beneficial ownership; automatic exchange of information; open data; international institutional architecture; and the role of gatekeepers in facilitating access to the financial system. With 12 members located across South America, Asia, Africa, Europe and the United States, the FTC works for global financial reform is more transparent and inclusive for all.

The Financial Accountability and Corporate Transparency (FACT) Coalition is a non-partisan alliance of more than 100 state, national and international organizations working to to create a more fair tax system that addresses the challenges of a globalized economy, while also promoting policies to combat the harmful impacts of corrupt financial practices. Some of the key goals of the FACT Coalition are to end the use of anonymous shell companies as vehicles for illicit activity; strengthen, standardize, and enforce anti-money laundering laws; require greater transparency from multinational corporations to promote informed tax policy; ensure that the United States constructively engages in global financial transparency initiatives; and eliminate loopholes that allow corporations and individuals to offshore income and avoid paying taxes. Through the FACT Coalition, GFI has been part of an aggressive advocacy campaign for beneficial ownership legislation in the United States. 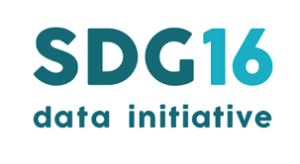 The SDG16 Data Initiative is a collective project by a consortium of organizations seeking to support the open tracking of the global commitments made by more than 194 countries on peace, justice and strong institutions, as per Sustainable Development Goal 16. The initiative aims to complement the current efforts underway to develop an official indicator framework for monitoring the SDGs. The Initiative, formed by a group of organizations with expertise in data analysis and collection, aims to fill the data gap in assessing progress on achieving SDG16, as a complement the official data that is collected by UN Statistical System. The work is an attempt to pull together data sets in an open format to track SDG16 and provide a snapshot of the current situation and eventually, progress over time.