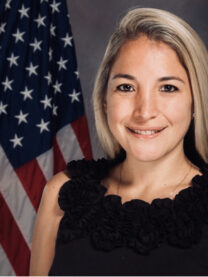 Claudia Helms is the Program Manager for Latin America & the Caribbean at Global Financial Integrity. Ms. Helms is primarily part of a project that analyses corruption and financial crimes in Latin America and the Caribbean. Her interests include corruption, security, democracy, and women empowerment in the Western Hemisphere.

Prior to joining GFI, Ms. Helms worked for several years at the Organization of American States, in the Department of Electoral Cooperation and Observation. She fulfilled a variety of roles including Core Group Member, Regional Coordinator, and International Observer in 23 Electoral Organization missions in Latin America and the Caribbean, getting to know each country’s reality and political context accordingly.

She managed responsibilities in different settings and processes that included General, Presidential, Parliamentary and Local Elections as well as Direct Democracy Initiatives. Ms. Helms previously worked on development and security issues in Boston, and in the private and academic sector in Peru.

A trained attorney, Ms. Helms graduated with honors from Universidad de Lima in Peru. Ms. Helms also holds a Master’s of Liberal Arts in Government, and a Graduate Certificate in Social Justice from Harvard University. She also completed the Program on Negotiation at Harvard Law School and received an Intelligence Diploma from the Centro de Altos Estudios Nacionales from the Ministry of Defense in Peru.