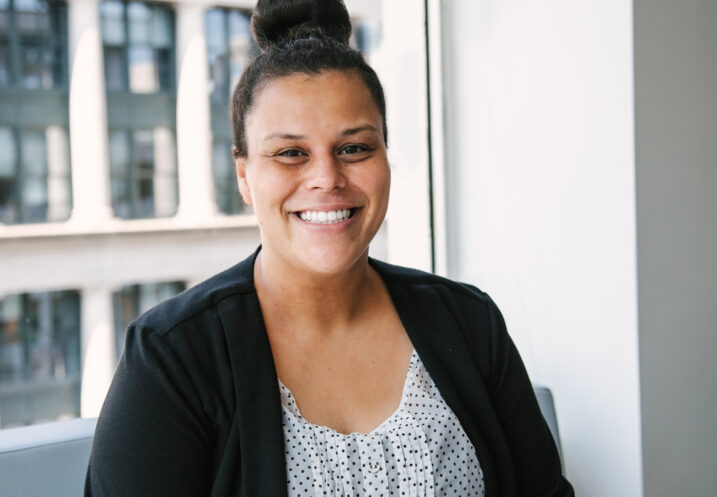 This piece is part of a series highlighting the voices and work of women in the transparency field, as part of Global Financial Integrity’s work coordinating the Women in Transparency Network. This interview features Melissa Wasser, Policy Analyst at the Reporters Committee for Freedom of the Press (RCFP). RCFP provides pro bono legal representation, amicus curiae support and other legal resources to protect First Amendment freedoms and the news gathering rights of journalists. This interview has been edited for clarity and length.

“I don’t think people realize how expansive their right to information is, because it’s conceptualized at the federal level, but there should also be accessibility within city councils, states, judges and court records.”

I went to law school from 2014-2017 straight from undergrad thinking I wanted to do civil rights litigation. I realized very quickly in law school that practicing law might not be the best thing for me because I saw myself in more of an advocacy and policy role, so I pursued a dual degree in public policy and management.

During my second summer in law school, I worked as a law fellow for the Human Rights Campaign in Washington, D.C., and that was the first time I had lived or worked outside of the state of Ohio. I absolutely fell in love with the city: how fast paced it was, how everything was different. I saw that I could combine law and policy to translate ideas for people who might not have legal training to understand what the Supreme Court does and how impactful its decisions are.

After that, I knew I wanted to be in D.C., so I used my networks to land over at the American Constitution Society, a legal nonprofit that is the largest network of progressive lawyers, judges and law students in the US. I was a law fellow there for one year. I learned a lot, expanded my D.C. network, and made great relationships with my former colleagues. I worked on judicial nominations and in the court access space, which included attending Senate Judiciary hearings on judicial nominations. The hearings were really interesting and confirmed my belief that even as a lawyer, too often we don’t know what our courts are doing all the time.

From there, an opportunity arose at the Reporters Committee for Freedom of the Press (RCFP), and I was hired to work as a Policy Analyst in September 2018. I examine all federal, state and local policy work connected to press freedom, news gathering and freedom of information requests. We also keep an eye on adjacent issues, such as those  surrounding the Espionage Act (for example, related to the Julian Assange case in the news last year). I found my niche in court access, where I monitor legislation, write blog posts and examine legal opinions and their impacts on court access.

Since then, I have testified to the House Subcommittee on Courts, Intellectual Property and the Internet, at a hearing dealing with operating federal courts during the Covid-19 pandemic – what were the best practices we have seen so far and what the lessons are for the future. I testified alongside three judges and it was a great experience. I’ve also previously testified or submitted written testimony for the Baltimore City Council, D.C. City Council and the New York State Senate on shielding police records, which was just recently repealed.

The Supreme Court has been incredible with opening up court access, but if I could make one overnight change for greater transparency, it would be to install live cameras at the Court. They started sharing live audio for the first time in history! The pandemic is awful, but I will say that it  has forced the courts to reimagine what access looks like right now. For journalists looking to access court records, they  would typically go to the courthouse to make a request, but with the closures, we have had to figure out how to maintain accessibility. Many courts have been pushing for remote video and audio access for the public to see what the courts are doing.

In the past, we have worked on trying to get live audio and video at the Supreme Court, but they were apprehensive, because video has never been done before. Even with audio access, only 28 cases since the year 2000 have been selected for same day audio. All oral arguments are recorded, but the audio usually isn’t available until the end of the week. Since the pandemic began, oral arguments were initially postponed, pushing off decisions on high profile cases involving the president’s tax returns. The Supreme Court hears cases the public has an interest in and it really slows down real-time reporting when they release audio at the end of the week. Live audio allows people to hear from the justices and legal experts to help them understand what’s at stake and it’s incredibly important.

I truly didn’t think I would see live audio at the Supreme Court in my lifetime, or at least not for 20 to 30 years. Since they implemented live audio, almost 2 million people have listened to a Supreme Court oral argument. I don’t think there’s any going back from that. This is the new normal, especially since it’s unclear when courthouses will be able to resume pre-pandemic operations. This has been a good way to establish a new precedent for court access, which is phenomenal.

Court access is a bipartisan issue: people generally want more access, but there are technical issues, as some districts don’t have broadband capabilities. Since the pandemic started, federal circuit courts have all started making live audio available, and some are including live video, which is even better. District courts have a policy in place from the Judicial Conference that says video should not be broadcast during proceedings, but this rule has been eased due to the pandemic. Some concerns revolve around privacy, but the district courts can still restrict broadcasting. During my congressional testimony, we talked through how the Judicial Conference can update that policy, the historic moment of the Supreme Court doing live audio and what they can do post-pandemic to keep it going.

There have been bipartisan bills for years that want live audio or cameras in the Supreme Court, similar to C-SPAN coverage of Congress. Some are nervous that this would leave the Supreme Court open to being taken out of context, but that has not hurt the sanctity of Congress. Just four hours after the case, almost half a million people had listened to the Supreme Court arguments regarding the case on Trump’s taxes. This is something people really want – live audio at the Supreme Court should be implemented permanently to extend the gains of transparency made during the pandemic.

As part of RCFP’s local focus, we worked with the D.C. City Council to give feedback on the city’s policy on police body cameras. RCFP was previously included on a Mayor’s roundtable to establish criteria for access to footage from officers’ body cameras. In our research, we saw that not much had changed since the body cam program had started five years ago. Reporters have said they get a lot of pushback from police departments when they make requests for footage or there are large fees and redactions associated with the footage. Since then, D.C. has had many high profile shootings involving police officers, including the 2016 killing of Terrence Sterling during a traffic stop. In that case, the officer failed to turn on his body-worn camera until one to three minutes after the shooting even though the officers had chased Sterling previously. Under D.C.’s policy, the camera should have been activated at the beginning of the pursuit or at the initial interaction.

In our testimony last October, we advocated for more timely access to body camera footage and better retention of footage in use of force cases. Without access to this footage, reporters have to rely solely on official reports and eyewitnesses until the video is released.  After recent protests, the D.C. City Council passed an emergency police reform bill requiring the release of body-worn camera footage and the name of any officer involved within 72 hours of a deadly shooting or serious use of force. It also prohibits officers from viewing body-worn camera footage when preparing incident reports and gives the D.C. Council more authority to obtain footage for its own investigations.

I also testified in front of the Baltimore City Council on a bill that would end gag orders in police settlements.  The testimony stressed the need for transparency in police settlements and noted the impact gag orders have on the ability of the press to fairly and accurately report on allegations of police misconduct. The Council later passed this law in October, which also required the city law department to publicly disclose information about claims. This was a big win for transparency in Baltimore.

For anyone looking for help accessing government records, RCFP put together a FOIA Wiki for filing a Freedom of Information Act request, demystifying the process for people. Another great resource is iFOIA.org, a portal that allows users to create, send, and track their state and federal FOI requests on one site. It also allows people to share their requests with others.

People have a right to know what their government is doing generally and what they are doing to combat the Covid-19 pandemic, especially about programs that use taxpayer money, like the Paycheck Protection Program. There should be more publicly available information on it. I think through the work I and RCFP do, we can show people how important their rights to information and government oversight are. I don’t think people realize how expansive that right is, because it’s conceptualized at the federal level, but there should also be more accessibility within city councils, state legislatures and judicial proceedings. There is power in information and the public has a right to know what the government is doing.