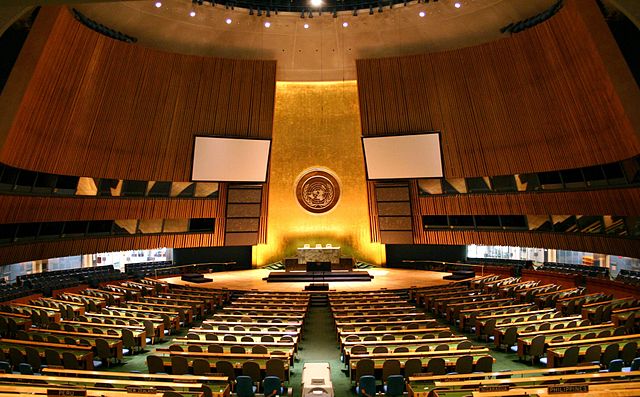 By Patrick Gruban, cropped and down sampled by Pine – originally posted to Flickr as UN General Assembly, CC BY-SA 2.0

On February 1st through 2nd, I and other youth representatives from around the world met at the UN’s ECOSOC Youth Forum to discuss how we can actively influence the implementation of the recently adopted Sustainable Development Goals (SDGs). A highlight of the event was a speech by Mr. Ahmad Alhendawi, the UN Secretary-General’s Special Envoy on Youth, who argued for his “Ten Myths about Youth,” in which he asserted that youth are not the future, seeing as we comprise so much of the world today and are directly and immediately affected by any decisions that take place. Youth are as much the present as any other group in society—participating youth repeatedly expressed their concerns about the current lack of employment opportunities (in advanced and developing economies alike). High levels of youth unemployment are correlated with major losses in human capital development, income and employment stability, and aggregate economic gains. 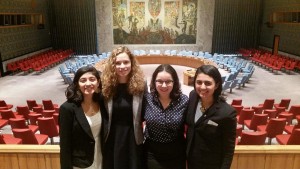 One way to stimulate youth employment would be to connect youth issues with financial transparency. I attended a functional breakout session on Peaceful and Inclusive Societies, pertaining to Goal 16: Peace, Justice, and Strong Institutions, that directly linked these two concerns. One of the objectives of Goal 16 is to “significantly reduce illicit financial and arms flows, strengthen the recovery and return of stolen assets and combat all forms of organized crime.” GFI estimates that $1.1 trillion in illicit financial flows drained out of developing countries in 2013. Our discussion around the role of youth in achieving this Goal focused on the issue of youth unemployment.

Youth unemployment could be addressed by first curbing rapidly increasing illicit financial outflows. A staggering 43% of the global youth labor force is unemployed or working but living in poverty. Stimulating employment entails creating conditions for local forms of investment to flourish. Money lost to the economy through trade misinvoicing could instead be invested, for example, in youth-run small businesses. Many youth entrepreneurs are turning away from their country’s hyper-competitive job markets to instead create their own startups. These companies generally fill some hole in the market, usually through internet-based means. Their small size and specificity of services render them inherently more transparent and manageable than large multinational corporations that have been notorious for tax avoidance. Trade misinvoicing also impinges on a government’s domestic resource mobilization efforts by artificially reducing revenue from customs and corporate income taxes. This is money that governments could have spent on public services that directly benefit youth, such as increasing funding for public schools, extracurricular activities, and vocational training.

Youth are well positioned to bring envisioned ideas to reality, because the present and future conditions of economies, political structures, and environments are of imminent concern. Since we are the ones who will be most affected by today’s decisions, we ought to be integrated into the decision making process. Youth’s lack of representation in legislative bodies renders us an easy population to ignore; the ECOSOC youth forum is a welcome start to the discussion. The next step is for youth to initiate the conversation with government regarding our needs and interests, such as ways to stimulate employment opportunities for youth. Rather than “including” youth in conferences run by adults, youth should lead the discussion.

The persistence and volume of illicit financial flows emerging from developing countries necessitates the participation of youth, as we will be affected most by the ramifications of lost investment, public services, and employment opportunities.