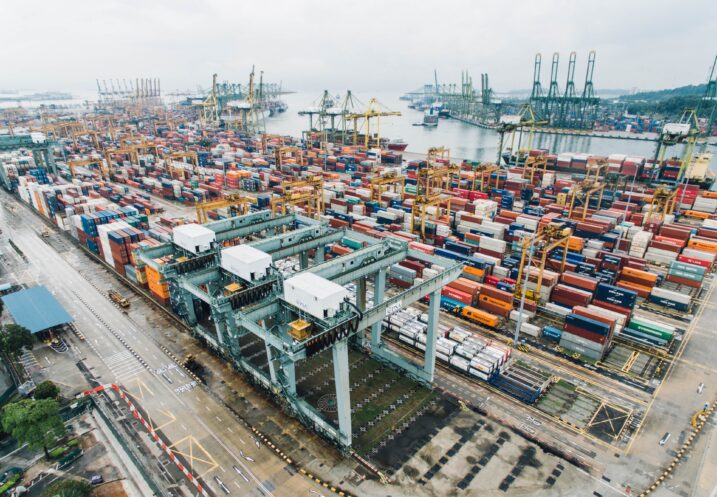 Trade misinvoicing is a persistent and significant feature of international trade transactions. It is a primary means of illicitly shifting funds in and out of a country. It occurs when importers and exporters deliberately falsify the prices, quality, or quantity of the goods on the invoices which they submit to customs officials in order to evade taxes/customs duties, escape capital controls, shift wealth into stronger and more stable currencies, hide profits abroad, among others. This deprives governments of significant trade tax revenues, which they could otherwise use to promote domestic growth and development.

According to Global Financial Integrity’s (GFI) research, between 2008-2017 there were $8.7 trillion in discrepancies identified in the international trade data regarding what different countries each reported about the value of their trade with each other. GFI believes a majority of this value gap was due to fraudulent trade misinvoicing activity and reflects trade that was not properly taxed by both importing and exporting countries. These are funds that governments could use to fund social programs needed to achieve the United Nations Sustainable Development Goals (SDGs).

Additionally, studies have shown that developing countries collect just about ten to 20 percent of GDP in taxes, while developed countries collect double, about 40 percent of GDP. Therefore, the losses of trade tax revenues due to trade misinvoicing further weakens domestic resource mobilization in developing countries, that is, the process through which countries raise and spend their own funds to provide for their people.

Trade misinvoicing primarily consists of the over-invoicing and under-invoicing of imports and export transactions by making false declarations of value on invoices submitted to customs agencies, depending on the intentions of the various actors.

On the other hand, an illicit actor or money launderer may over-invoice an import or export transaction to have a legitimate justification to transfer funds abroad or to justify the origins of illicit funds. Both legitimate businesses and illicit criminal networks alike engage in trade misinvoicing activity in order to illicitly transfer funds across borders.

Over the ten year period (2008-2017) examined by GFI’s most recent annual report, the data showed that these trade misinvoicing techniques have been persistent in international trade transactions. Thus, enabling importers and exporters to hide and illicitly move their profits abroad while evading the proper levels of trade and income taxes due. Additionally, even as companies engage in such trade misinvoicing activities, some are also able to benefit from various subsidies and other tax incentives offered by governments. Of course, the long-term harm being done by trade misinvoicing is that it drains developing country governments of much needed revenues for promoting domestic growth and sustainable development, while also facilitating criminal activity.

GFTradeTM is a proprietary, cloud-based risk assessment tool developed by GFI to help customs departments detect international trade transactions that show any indication of trade misinvoicing. The tool enables customs departments to check the values of goods declared on official customs invoices by importers and exporters to verify if they are reasonably in accordance with average prices in world markets over the previous 12 months while the goods are still in the port. This enables customs officials to identify an erroneous declared price, have the importer or exporter declare the correct price, and thereby enable the customs authorities of both countries to collect the right amount of duties and other taxes.

GFTradeTM uses the most recent official monthly trade data and Harmonized System (HS) product codes from 43 of the world’s largest trading countries, including China, the US, Japan, and EU27, to compare the information provided by the declarant (declared price, quantity, and commodity) with the average prices for comparable goods reported by the trading partner to check for any inaccuracies.

The tool offers a user-friendly visual that colorfully displays the price comparisons in several ways in order to provide the user with a complete picture and enable him/her to make an informed decision about a particular transaction. For example, users can compare the declared value against the 12-month average price reported by the trading partner, against the average monthly price over the last twelve months or against the most recent average price declared by the trading partner. This helps to remove the long-standing problem of asymmetry of information in international trade transactions, which is the greatest obstacle to trade integrity, that is, ensuring that international trade transactions are legitimate, properly priced, and transparent.

In addition, GFTradeTM can be integrated into countries’ existing customs management systems to ensure all imports and exports are automatically checked by the tool, so no misinvoicing escapes detection. This helps to improve customs clearance efficiency as more focus and scrutiny will be placed on commodities identified as likely posing a high risk of misinvoicing, whereas low-risk commodities are quickly cleared, saving time and energy.

In the following example, assume there is an import of champagne to Cameroon from France. In the hypothetical case, a custom official in Cameroon uses GFTradeTM to compare or check, the price declared by the importer on the invoice submitted to customs against the official French government trade data on champagne export prices to Cameroon over the last 12 months to identify any discrepancies.

The customs official would enter the information on the invoice into the GFTradeTM interface, selecting the transaction type (import/export), the partial HS Code for the relevant commodity (i.e. champagne – 2204), the country of origin/destination and clicking on the search button. Next, she would select from the search results the commodity that most closely matches the information on the invoice, as shown below: 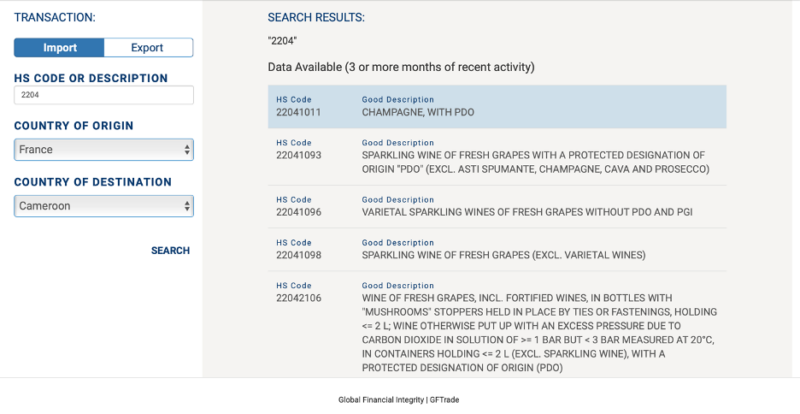 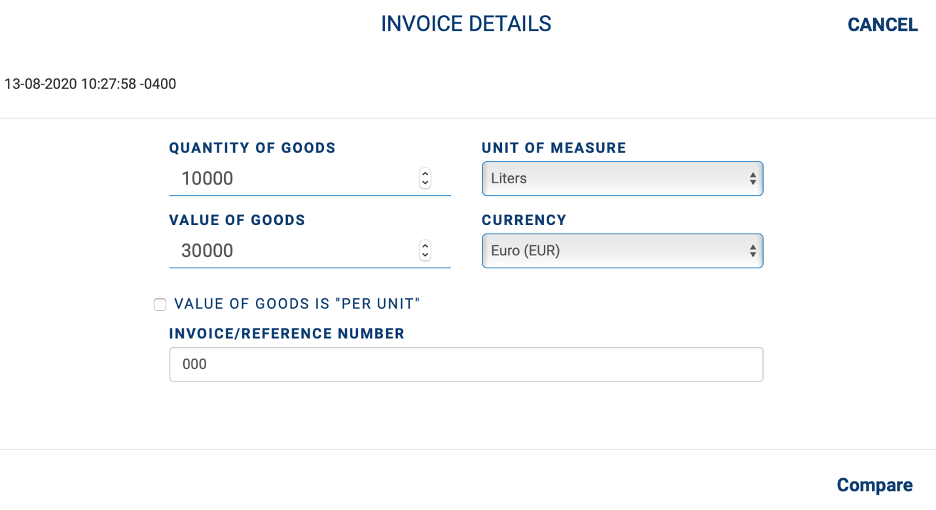 GFTradeTM will return a visual comparison between the unit price of that transaction, against the average unit price and the most recent average price reported by the partner country over the past 12 months: 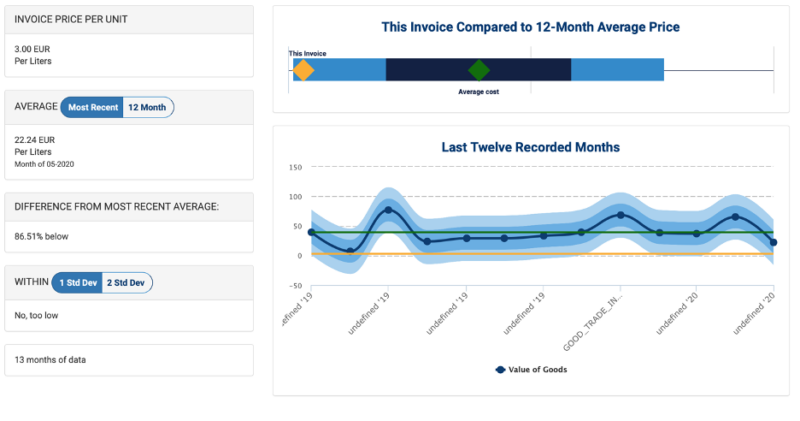 In this example, the declared value of the good is clearly out of synch with recently prevailing prices. Notably, the invoice price is 86.51 percent below the most recent average price, as shown in the table on the left of the graphic. This is also visible in the chart, where the orange line, representing the price on the invoice, is well below the green line depicting the 12-month average price. This suggests the transaction has been under-invoiced. In this case, the customs official will have to revalue this transaction in order to collect the proper amount of customs duties due to Cameroon.

GFI obtained real-world data from developing country governments that have implemented GFTradeTM in their customs departments. The countries’ names have been anonymized for privacy.

In ‘Developing Country A,’ during a 12-week period in 2018, more than US$100 million in under-invoiced imports was detected by customs department valuation officials using the GFTradeTM risk assessment tool.

In a second country, ‘Developing Country B’ use of the GFTradeTM tool enabled the customs department to detect over €135 million in under-invoiced imports. The undervaluation amounts were calculated by comparing the value of the import invoices for goods shipments against official government trade data obtained from the exporting nations.

It should be noted that in the cases above, not all import invoices were entered into the GFTradeTM database for value comparison, which suggests that the actual scale of under-invoicing is likely to be much higher than detected.