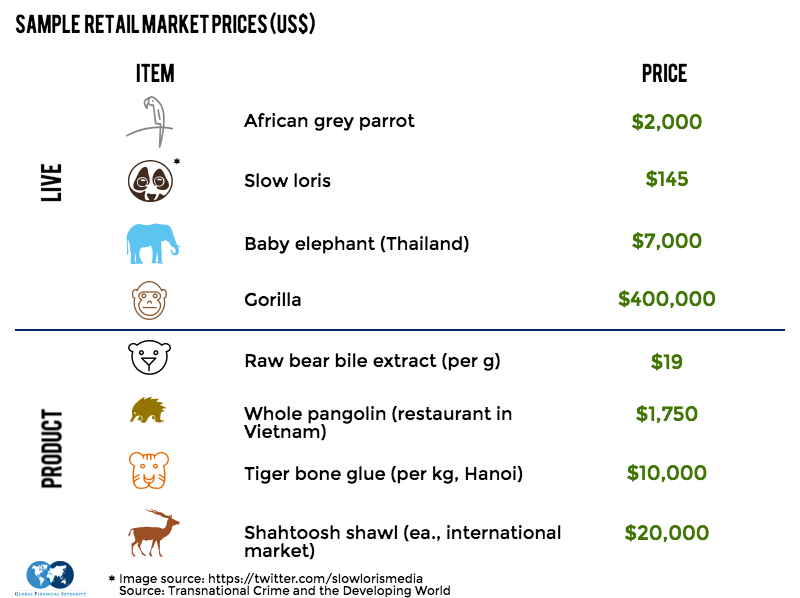 In the illegal wildlife trade, like all transnational crime, the majority of participants are involved for financial gain. Retailers generally face little enforcement risk while realizing strong profits, as the value of a particular commodity, be it a wild African grey parrot or grams of bear bile, increases dramatically as it makes its way from source to market country.

African grey parrots are endemic to the rainforests of equatorial Africa, however rampant poaching, deforestation, and habit loss, among other threats, have led to a sharp drop in the size of wild populations. This species is one of the most traded birds in the world and can retail for approximately US$2,000.

Slow lorises appear cute and cuddly, but their illegal capture and treatment are anything but. An undercover investigation by Freeland Foundation found slow lorises for sale for approximately US$145 in Pattaya, Thailand. Asian elephants, particularly babies, are popular in Southeast Asia’s tourist trade. Poachers will kill adult elephants in order to capture and sell their babies, which can retail for approximately US$7,000 in Thailand.

While more great apes are killed for the bush meat trade, some are poached for the exotic pet, animal park, and zoo trades. The United Nations Environment Programme reports that traffickers who illegally sold gorillas to a zoo in Malaysia charged US$400,000 for each gorilla.

Bear bile extract, pangolin, and tiger bone glue are all consumed due to incorrectly perceived medicinal health benefits, which lie in deep-seated cultural beliefs. These items are primarily consumed in East and Southeast Asia. Bears, most commonly the Asiatic black bear, are kept in inhumane conditions at farms in order to collect their bile, which can be worth US$19 per gram, however wild bears are often still poached due to the opinion that their bile is better.

Pangolins, the most trafficked species in the world, are poached for both their meat and scales. A whole pangolin served at a restaurant in Vietnam can sell for US$1,750, or approximately US$350 per kilogram. Also sold in Vietnam (as well as throughout the region) is tiger bone glue, which is believed to treat a variety of ailments and improve masculinity, and is likewise consumed as a status item. This product is made from the bones of farmed and poached wild tigers and retails for as much as US$10,000 per kilogram.

Shahtoosh is the name of a specific type of shawl made from the fleece of Tibetan chiru antelopes, an endangered species, which must be killed in order to harvest the fleece. The international trade in shahtoosh is banned under the Convention on International Trade in Endangered Species of Wild Fauna and Flora (CITES) and in many countries, including the United States, India, and Pakistan. Valued for its softness and warmth and seen as a status symbol, a shawl can cost up to US$20,000.

The financial gains made from poaching will continue to drive the illegal wildlife trade until risks are increased and profits diminished. The international community needs to recognize wildlife trafficking as a serious transnational crime and should attack the underlying systems and networks that support this business.

For more information on the illegal wildlife trade and how to combat this and 10 other transnational crimes, see Global Financial Integrity’s latest report Transnational Crime and the Developing World.

Update: Global Financial Integrity would like to thank the Freeland Foundation for helping us to correct our figure for slow loris prices in Pattaya, Thailand. The average price of a slow loris there is not US$5,000 but rather up to 5,000 Thai baht, which approximately US$145.