This December 2013 report from Global Financial Integrity, Illicit Financial Flows from the Developing World: 2002-2011, finds that the developing world lost US$5.9 trillion in illicit financial flows from 2002-2011, with illicit outflows alarmingly increasing at an average rate of more than 10 percent per year.

The report is the fourth update of Global Financial Integrity’s groundbreaking report, Illicit Financial Flows from Developing Countries 2002-2006. For the first time, the 2013 report incorporates re-exporting data from Hong Kong and uses disaggregated—as opposed to aggregated—bilateral trade data for those countries which report it.

GFI recommends citing from the most recently released research. The most recent annual report is Illicit Financial Flows to and from 148 Developing Countries: 2006-2015. 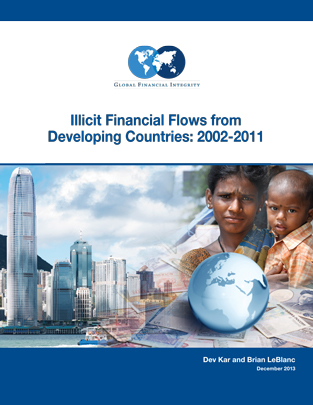 The developing world lost US$946.7 billion in illicit outflows in 2011, an increase of 13.7% over 2010. The capital outflows stem from crime, corruption, tax evasion, and other illicit activity.

The report finds that from 2002 to 2011, developing countries lost US$5.9 trillion to illicit outflows. The outflows increased at an average inflation-adjusted rate of 10.2% per year over the decade—significantly outpacing GDP growth.

As a percentage of GDP, Sub-Saharan Africa suffered the biggest loss of illicit capital. Illicit outflows from the region averaged 5.7% of GDP annually. Globally, illicit financial outflows averaged 4% of GDP.

For the first time, this year’s report incorporates re-exporting data from Hong Kong and uses disaggregated—as opposed to aggregated—bilateral trade data for those countries which report it. The authors of this report believe that GFI’s previous methodology—which was accepted by most economists studying trade misinvoicing—resulted in an estimate that potentially overstated illicit outflows from many Asian countries and understated illicit outflows from other countries. Post-revision, the authors believe they have produced the most accurate estimate of global illicit financial outflows produced by GFI to date.

Click here for a more thorough briefing on methodologies used by GFI.

The Top 25 countries with the highest measured cumulative illicit financial outflows between 2002 and 2011 were:

Dev Kar is Global Financial Integrity’s Chief Economist, having formerly served as a Senior Economist at the International Monetary Fund.

Brian LeBlanc is a Junior Economist at Global Financial Integrity.

Funding for this report was generously provided by the Ford Foundation and the Financial Transparency Coalition.

What Are Illicit Financial Flows? What Does This Report Measure?

Illicit financial flows are cross-border transfers of funds that are illegally earned, transferred, or utilized. These kinds of illegal transactions range from corrupt public officials transferring kickbacks offshore, to tax evasion by commercial entities, to the laundered proceeds of transnational crime.

The first, Hot Money Narrow (HMN), looks at money that has disappeared from the balance of payments. GFI infers that HMN is likely to represent kickbacks, bribery, and other forms of unrecorded wire transactions. Countries that are rich in natural resources, like oil, tend to have higher HMN numbers relative to others. HMN accounts for about 20.3% of the illicit financial flows estimated in this report.

The second, Gross Excluding Reversals (GER), looks at trade misinvoicing, a common method used by commercial entities for the cross-border movement of illegal money. Exporters and importers manipulate trade invoices to over-represent or under-represent the value of the goods they are shipping. Often, this will involve re-invoicing the goods through a secrecy jurisdiction. The result is that a certain sum of money disappears on one side of the border—either from the importer or exporter. We detect this by comparing what a country says it is exporting, and what the rest of the world says it imports from that country, and vice versa.

Certain types of trade misinvoicing are used for different purposes. Drug cartels and terrorist networks have been known to use it to launder money. Importers and exporters use it to evade customs duties. Other tax evaders, criminals and corrupt public officials in developing countries use it to hide wealth or ill-gotten gains. GFI’s methodology is unable to distinguish between the different sources of trade misinvoicing.

What Impact Do Illicit Financial Flows Have?

US$947 billion is a tremendous amount of money to drain out of developing countries. It represents roughly ten times the amount of official development assistance (ODA) flowing in from advanced economies (.xls). In fact, a report by GFI found that even after you account for all types of financial flows, including investment, remittances, debt forgiveness, and natural resource exports, the continent of Africa is a net creditor to the world. GFI has not yet applied this analysis to the rest of the developing world, but it is in the process of doing so.

Further, illicit financial flows have a subversive effect on government in a few ways. First, they encourage corruption, by allowing corrupt public officials to siphon money away from public coffers and into secret offshore bank accounts. Second, every country case study that GFI has performed has shown that increased illicit financial flows grow a country’s underground economy. As the underground economy expands, criminal elements become more powerful and more difficult for law enforcement to fight. To make matters worse, the research also shows that, as a country’s underground economy grows, criminals respond by moving more money out of the country, and so on. This vicious cycle helps to explain why illicit flows grew at an inflation-adjusted 10% per year from 2002-2011.

Finally, illicit financial flows are one of the world’s biggest, and least talked about, drivers of inequality. Those with the wealth and resources to use highly sophisticated money laundering techniques to smuggle money out of the country are almost exclusively powerful and affluent, and their victims are ordinary citizens.