HomeResearch/AnalysisIllicit Financial Flows and the Problem of Net Resource Transfers from Africa: 1980-2009

Illicit Financial Flows and the Problem of Net Resource Transfers from Africa: 1980-2009

This May 2013 report jointly produced by Global Financial Integrity and the African Development Bank finds that, from 1980 to 2009, developing African countries lost up to $1.4 trillion in net resource transfers, which are comprised of both licit and illicit flows, including investment, remittances, debt relief, and illicit financial flows.

The implications of this report are broad. Despite foreign aid, natural resource exports, and other transfers, developed countries still take away more resources than they give to Africa. 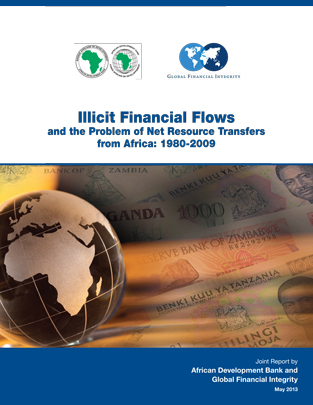 Between 1980 and 2009, the economies of Africa lost between US$597 billion and US$1.4 trillion in net resource transfers away from the continent.

The resource drain on Africa over the past thirty years is almost equivalent to Africa’s current GDP. This represents a major drag on African development, and dwarfs much of the effort that donor countries undertake to boost the continent’s struggling economies.

The report recommends several policies, including: