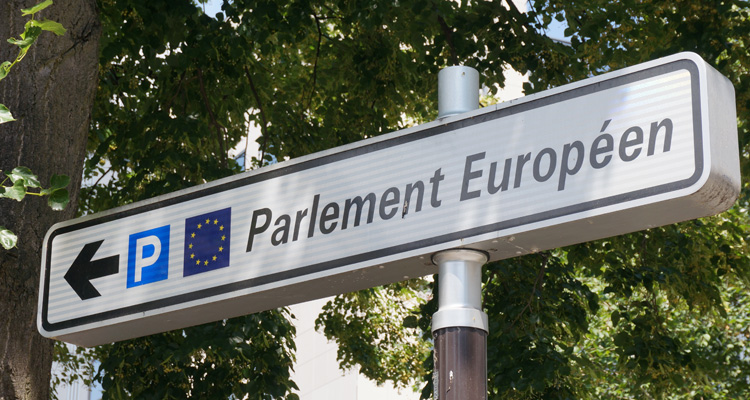 A sign near the European Parliament in Strasbourg. Image: Clark Gascoigne / GFI

WASHINGTON, DC – Global Financial Integrity (GFI) applauded the European Parliament and the Council of the European Union for agreeing yesterday to crack down on anonymous companies, a major conduit for laundering the proceeds of crime, corruption, and tax evasion. Just Tuesday, GFI released its annual flagship analysis of illicit financial flows from developing countries, which found that such flows—growing at nearly twice the rate of global GDP—reached a historic high of US$991.2 billion in 2012, the most recent year for which data is available.

Yesterday’s agreement represents several months of negotiations between the EU’s governing institutions over proposed revisions to the EU’s Anti-Money-Laundering Directive (AMLD), in which the measures the Directive would take to address anonymous companies were a key area of discussion. Pending final approval by the full Parliament, the revised Directive will require every EU member country to collect information on the “beneficial owners,” or the natural persons who ultimately own or control a company, for all companies in their jurisdiction and store this information in a central registry available to law enforcement, financial institutions, and others who can demonstrate that they have a legitimate interest in obtaining beneficial ownership information for companies.

“We strongly praise the European Union for its movement to crack down on anonymous companies,” said GFI President Raymond Baker, a longtime authority on financial crime. “Anonymous companies are the number one tool for laundering the proceeds of crime, corruption, and tax evasion. Creating registries of the true, human, ‘beneficial’ owners of each company is a common sense approach to curbing financial crime and the tremendous flow of illegal money.”

In March, the European Parliament overwhelmingly approved a version of the Directive that would have required every EU country to establish ownership registries and make the information freely available to the public. The Council, which is composed of government ministers from each EU country, released its own draft in June that would also mandate central registries but not require public access.

The agreed text strikes a compromise between these initial positions, requiring EU countries to provide access not only to law enforcement and financial institutions, but also to members of the public with a “legitimate interest” in the information, although there is no indication of what interests will be considered legitimate. The Directive also will not prevent countries from going beyond the Directive’s requirements and opening their registries to full public access, as the United Kingdom and Denmark have already announced plans to do.

“The collection of ownership information for banks and law enforcement is an important step in the right direction, but we are disappointed that the agreement does not reflect Parliament’s clear consensus in favor of fully public registries across Europe,” said GFI Policy Counsel Joshua Simmons. “The astounding array of nefarious activities that anonymous companies facilitate and the broad variety of constituencies that would benefit from the information make public registries a no-brainer. We encourage all European countries to make a clear commitment to transparency and follow the examples of the UK and Denmark in establishing fully public registries.”

The agreement also sharply contrasts with the lack of progress in the United States, where U.S. states are notorious internationally for allowing anonymous companies to be formed. However, despite the U.S. Administration’s continued commitments to increase beneficial ownership transparency over the past several years, they have done little to achieve progress on the issue domestically.

“The U.S. is the second easiest place in the world, next to Kenya, for someone to create an anonymous shell company to launder illicit proceeds,” stated Mr. Simmons. “The White House has repeatedly endorsed the need for legislation to ensure that beneficial ownership information on all U.S. companies is available (at least) to law enforcement, but action has been slow to follow that commitment.”

“Bipartisan legislation has been introduced in both the U.S. House of Representatives and the U.S. Senate that would create registries of beneficial ownership information which would be available to law enforcement and could be made available to the public by U.S. states, but the Administration and Congressional leadership have been slow to push the issue because they are bowing to state pressure to let them continue with business as usual,” continued Mr. Simmons. “It is time for Congress and the Administration to live up to their G8 and Open Government Partnership commitments by moving to pass legislation to protect not only Americans, but people around the world from criminals laundering their proceeds using U.S. companies. The European announcement makes the lack of progress in the U.S. not only shameful, but embarrassing as well.”

Global Financial Integrity (GFI) is a Washington, DC-based research and advocacy organization, which promotes transparency in the international financial system as a means to global development.