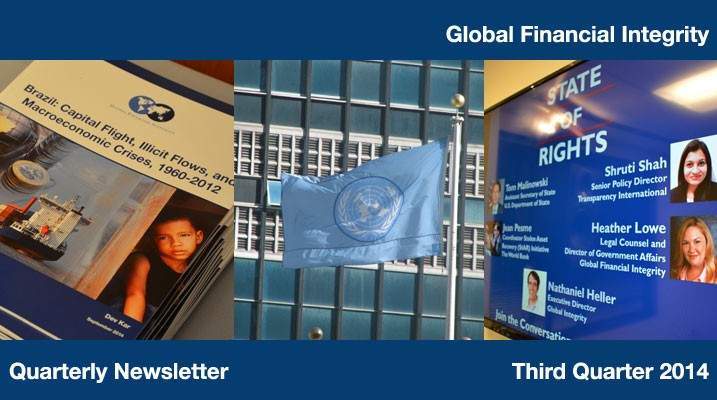 Global Financial Integrity is pleased to present GFI Engages, a quarterly newsletter created to highlight events at GFI and in the world of illicit financial flows. We look forward to keeping you updated on our research, advocacy, high level engagement, and media presence. The following items represent just a fraction of what GFI has been up to since May, so make sure to check our new website for frequent updates.

The big news this quarter was the U.S.-Africa Leaders Summit held in Washington, D.C. in early August, which brought together leaders from fifty African nations with President Obama, and included a ground-breaking announcement that a joint high-level working group on illicit financial flows would be formed. GFI participated in the summit’s Civil Society Forum as well as several additional side events, and were proud to partner with the Open Society Foundations (OSF) and other organizations to host the event “Resources for the Future: Partnering with Civil Society for Transparency and Accountability in Africa,” which celebrated the role of civil society in advocating for transparency and accountability in Africa and discussing ways to make further progress. The high-caliber roster of speakers are too numerous to list here, but included Vice President Joseph Boakai of Liberia; George Soros, founder of OSF; Mo Ibrahim, founder of the Mo Ibrahim Foundation; and Mojanku Gumbi, a trustee of the Thabo Mbeki Foundation. The public event was followed by an African-U.S. civil society working session. 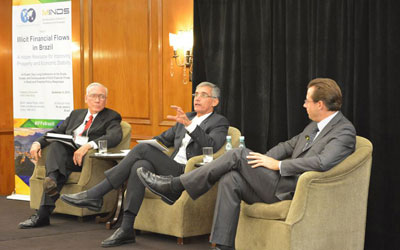 On September 9, GFI held a one-day joint conference with the Multidisciplinary Institute for Development and Strategies (MINDS) in Rio de Janeiro. The event, titled “Illicit Financial Flows in Brazil: A Hidden Resource for Improving Prosperity and Economic Stability”, included discussions on the scale, causes, and consequences of illicit financial flows in Brazil as well as potential policy responses. The conference was based on GFI’s brand new report Brazil: Capital Flight, Illicit Flows, and Macroeconomic Crises, 1960-2012, and featured panelists and keynote remarks by Brazilian and international experts, including:

The report found that US$400 billion flowed illegally out of Brazil between 1960 and 2012.

The Egmont Group of Financial Intelligence Units, an informal international network of financial intelligence units (FIUs), invited GFI President Raymond Baker to be the Keynote Speaker at their Plenary meeting in Lima, Peru. The 22nd Egmont Plenary ran from June 1-6 and involved more than 320 participants, including representatives from 115 FIUs and 15 international organizations. Raymond’s keynote address, titled “Financial Transparency: Moving Towards Systemic Solutions,” noted that FIUs must work to change the system from within in order to contribute to a safer and more secure world. Murray Michell, the Chair of the Egmont Group, wrote that “the Egmont Group of Financial Intelligence Units looks forward to working closer with Global Financial Integrity in our pursuit to assist FIUs combat money laundering and terrorist financing. I personally look forward to continuing our positive and productive relationship.”

On September 5, 2014, Tom Cardamone gave a presentation at the workshop “Preventing Illicit Financial Flows: Financing Development in Asia Pacific”, hosted by the Anti-Corruption Unit of the Kingdom of Cambodia in Phnom Penh. The workshop was part of the Regional Annual Conference of the ADB/OECD Anti-Corruption Initiative for Asia and the Pacific with the support of the United Nations Development Program, the United Nations Office on Drugs and Crime, and the ADB/OECD Secretariat. Participants included senior officials from 27 countries in the Asia Pacific region – including representatives from anti-corruption authorities, financial intelligence units, centers of government, ministries of finance, civil society, development partners and regional and international experts bringing various perspectives on illicit financial flows. Participants welcomed the possibility for follow-up discussions at the country and regional levels on how to prevent illicit financial flows, including: 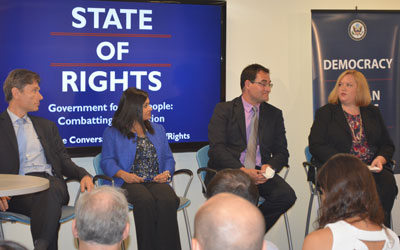 On September 3, 2014, Heather Lowe, GFI’s Legal Counsel and Director of Government Affairs, appeared on a U.S. State Department panel to discuss the links between governance and human rights as well as addressing ways to curb corruption. Titled “Government for the People: Combating Corruption,” the panel is the first in a series of conversations that the State Department will be sponsoring under the “State of Rights” theme. Joining Heather on the panel were Tom Malinowski, the Assistant Secretary for Democracy, Human Rights, and Labor at the U.S. Department of State; Jean Pesme, Coordinator for the Stolen Asset Recovery Initiative at The World Bank; and Shruti Shah, Senior Policy Director on Law and Regulation at Transparency International-USA.

GFI continues to advance financial transparency issues and policy proposals in a multitude of international forums, traveling to Germany, Peru, and the United Kingdom, among other countries. While in Lima to keynote the Egmont Group annual meeting, Raymond Baker also met with Oriana Suarez, Director General of LATINDADD, and Renaud Fossard, LATINDADD’s Financial Transparency Coalition Manager, to discuss FTC coordination and our combined efforts. Raymond and Oriana also met locally with Jose Giancarlo Gasha, Deputy Minister of the Economy for Peru.

In early July, The World Bank Office of Suspension and Debarment released a report, Functions, Data and Lessons Learned 2007-2013. We are excited about this report because it explains the detriments of fraud and corruption, often involving illicit financial flows, on World-Bank-financed projects.

Through her involvement on the Coordinating Committee of the UN Convention against Corruption’s (UNCAC) Civil Society Coalition, GFI’s Senior Program Officer Christine (Kristi) Clough participated in the UNCAC Implementation Review Group (IRG) Session on June 2-6 in Vienna. Established in August 2006, the UNCAC Coalition is a global network of over 350 international civil society organizations which promote, ratify, and monitor the UN Convention against Corruption. Kristi led a presentation on beneficial ownership at the IRG meeting, and additionally was elected to serve as one of the two International Member Organization Co-Chairs of the Coalition’s Coordination Committee.

In late July, the Financial Crimes Enforcement Network, an agency of the U.S. Department of the Treasury, issued a Notice of Proposed Rulemaking to require banks under U.S. jurisdiction to collect information about the beneficial owners of companies for which they open accounts, a change that GFI has advocated for since its founding. GFI staff is currently reviewing the notice and plan to submit extensive comments to Treasury to ensure the rule is effectively crafted and applied. 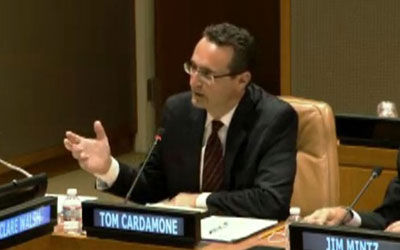 GFI’s Tom Cardamone speaks on a panel at the United Nations on September 24, 2014.

On September 24, 2014, Tom Cardamone participated in a panel at the UN titled “Curbing Illicit Financial Flows for Domestic Resource Mobilization and Sustainable Development in the Post-2015 Era.” Co-hosted by Mexico, Australia and the OECD, the panel discussed issues such as international tax evasion and avoidance, money laundering, bribery, and asset recovery in the context of the SDG target on illicit financial flows proposed by the UN Open Working Group. The panel, which included OECD Secretary General Angel Gurria, Nigerian Finance Minister Ngozi Okonjo-Iweala, and Australia’s G20 Chair for the Development Working Group Clare Walsh, also considered ways to overcome implementation challenges and how to more effectively mobilize domestic resources for sustainable development.

The report Brazil: Capital Flight, Illicit Flows, and Macroeconomic Crises, 1960-2012 found that during the period 1960 through 2012, Brazil lost a total of US$590.2 billion through broad capital flight, of which US$401.6 billion is attributable to illicit financial outflows.

How Billions are Sneaking out of Brazil and Harming Development
Quartz, September 8, 2014

GFI staff have been to over 40 different countries on six continents within the last 12 months!