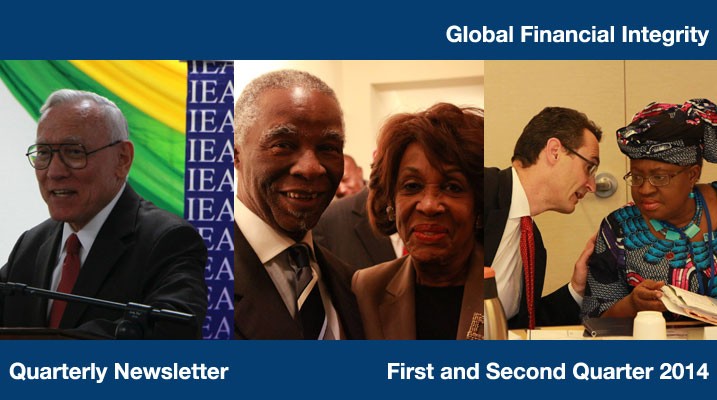 On April 11, GFI held a high-level roundtable on the linkage between illicit financial flows and growing global inequality. To our knowledge, never before has such an esteemed group of development experts and policy makers been brought together to discuss IFFs and inequality. We believe this meeting will be a catalyst for joint efforts that push for extraordinary change in the areas of global development and poverty alleviation. Forty-seven members of the development, policy, aid, and foundation communities attended, including:

Illicit Financial Flows to and from the Philippines: A Study in Dynamic Simulation, 1960-2011
February 2014
President Benigno S. Aquino III of the Philippines quickly endorsed the study after its release.

Hiding in Plain Sight: Trade Misinvoicing and the Impact of Revenue Loss in Ghana, Kenya, Mozambique, Tanzania, and Uganda: 2002-2011
May 2014
The report was released at an event that featured Raymond Baker and Hon. Mogens Jensen, Danish Minister of Trade and Development Cooperation.

GFI President Raymond Baker met with Finnish Minister for International Development Pekka Haavisto in early May to discuss illicit flows and possible collaborations between GFI and the Finland government. Raymond also made a presentation at a government-sponsored conference on fragile states.

In conjunction with the launch of GFI’s study on illicit flows from the Philippines, Tom and GFI Communications Director Clark Gascoigne met with Central Bank Deputy Governors Mr. Vicente Aquino and Mr. Diwa Guinigundo as well as Finance Department Undersecretary Mr. Jeremias N. Paul, Jr. to discuss the report findings. Meetings were also held at the World Bank and the Asian Development Bank.

In the first quarter of 2014, GFI’s Policy Team continued to advance key financial transparency issues to various international bodies.  These efforts included consultations with or formal presentations on illicit financial flows-related topics in Brussels (FATF), Paris (OECD), The Hague (The Hague Institute for Global Justice), Abuja, Nigeria (Innovative Financing for Development), and at the World Bank.

Managing Director Tom Cardamone traveled to Canberra in late January to meet with high-level members of the Australian government to promote GFI’s key talking points related to the upcoming G20 Summit in Brisbane. Meetings were held with officials in the Department of Foreign Affairs and Trade and the Department of the Prime Minister. While in Australia several additional meetings were also held with organizations in the development, policy and foundation communities as well as with the Australian C20 Steering Committee.

GFI staff teamed with colleagues in the Financial Transparency Coalition (FTC) in advocacy efforts in the European Parliament.  Specifically, the talking points included a call to revise the EU’s Anti-Money-Laundering Directive by requiring public registries of company beneficial ownership. The proposal to include such a requirement passed the Parliament overwhelmingly, and we are hopeful it will remain in the revisions currently being negotiated between the European Council, Commission, and Parliament.

GFI is also a member of the Financial Accountability and Corporate Transparency (FACT) Coalition. In collaboration with other FACT member organizations, GFI helped to lead the Coalition’s advocacy efforts for the Incorporation Transparency and Law Enforcement Assistance Act, a bill that would require all companies formed in the United States to disclose their beneficial ownership upon formation.

Of the five regions studied in Illicit Financial Flows from Developing Countries: 2002-2011, Africa lost more illicit outflows as a percentage of GDP than any other:

Trade and Money Laundering: Uncontained
The Economist, May 3, 2014