GFI: Egypt lost US$1.6 billion to Trade Misinvoicing in 2016; Revenue needed for SDGs 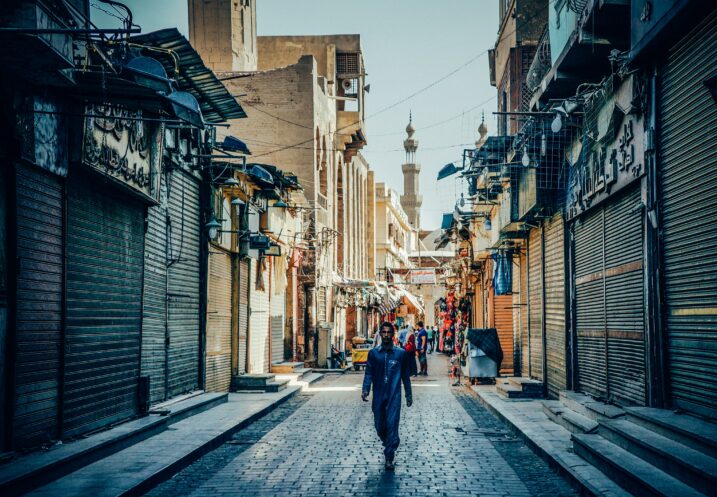 On June 26th, Global Financial Integrity (GFI) published a comprehensive study estimating Egyptian revenue losses of approximately US$1.6 billion as a result of trade misinvoicing in 2016. By deploying a detailed analysis of the United Nations Comtrade database (Comtrade), GFI was able to estimate the government revenue losses of approximately US$1.6 billion, or 4.1 percent of Egypt’s total government revenue collections in 2016. GFI concluded its report by recommending both national and international policy initiatives the Egyptian government can take to curtail illicit financial flows and regain revenue lost to trade misinvoicing. 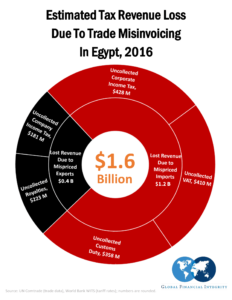 Trade misinvoicing is the act of exploiting global trade as a way to avoid customs duties, value added taxes (VAT) or corporate income taxes, fraudulently access subsidies, or hide illicit cash flow. Trade misinvoicing occurs when one side of a trade mis-reports either the quantity, price, or quality of the goods being traded and can take on four forms- import over-invoicing, import under-invoicing, export over-invoicing and export-under invoicing. These practices result in government revenue losses and, depending on the type of misinvoicing, illicit inflows and outflows to/from a country.

For example, if China reports a shipment of US$3 million worth of plastics to Egypt, but Egypt only reports US$2 million worth of plastics received from China, then either the exporter on the Chinese side has committed export over-invoicing, or the importer on the Egyptian side has engaged in import under-invoicing. This could be done as a way to launder money into Egypt, or to avoid paying corporate income taxes on the importing side. Trade misinvoicing is easily preventable using tools like GFI’s GFTrade, which tracks recent trade prices across major trading countries, enabling customs officials to check invoices for fraud in real time.

By analyzing the export data of all trade partners with Egypt, as well as Egypt’s import data from Comtrade, GFI was able to estimate the overall trade gap between what Egypt reports as having exported/imported, and what its trading partners report as exporting/importing to/from Egypt.

GFI estimated that the value of the trade gap for misinvoiced goods in Egypt was roughly US$8.5 billion, or 10.5 percent of its total trade of US$80.6 billion in 2016. To estimate the revenue losses Egypt may have incurred, GFI analyzed existing VAT taxes, customs duties, royalties and company income taxes, applying these rates to the transactions where trade misinvoicing occurred.

Next, GFI examined the HS product codes to determine what types of goods were most frequently misinvoiced and from which countries they originated. The Egyptian imports most at risk for high values of import under-invoicing were essential oils, vehicles, machinery and meats, while the countries with the highest values of import under-invoicing were Ireland, China and Switzerland.

The US$1.6 billion Egypt is estimated to have lost to misinvoicing in 2016 is money that could have been spent advancing Egypt’s progress on the internationally agreed-upon Sustainable Development Goals (SDGs).

Other possibilities for spending the lost US$1.6 billion could have included an increased focus on hunger, education and decent work. In June 2018, the World Bank published a paper entitled ‘Sustainable Development Goal Diagnostics: The Case of the Arab Republic of Egypt’, finding that Egypt had seen improvement in nine of the reported 15 SDGs. Of the SDGs that did not see improvement were Zero Hunger (SDG 2), Education (SDG 4), Decent Work (SDG 8), Sustainable Cities and Communities (SDG 11) and Responsible Consumption and Production (SDG 12). The report also noted that, “despite the fact that the eradication of extreme poverty has been statistically achieved, it is one of increasing importance to prioritize the needs of those living below the poverty line.”

Internationally, key areas of importance include:

Ben Iorio is a 2019 GFI Summer Intern and a student in Economics at the University of Michigan.