Remittances and Transparency in Government Reporting 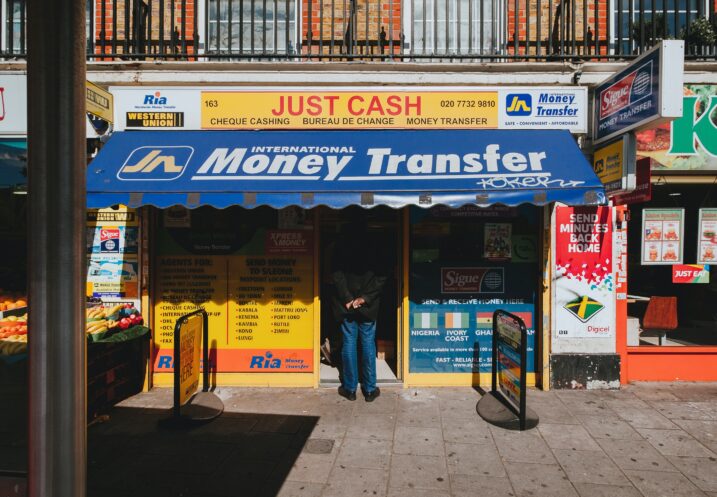 By Julia Yansura and Laura Porras

Today, June 16th marks the International Day of Family Remittances, dedicated to recognizing the contributions of the international migrants who send over US$550 billion home to developing countries each year. And while remittances are by no means a development panacea, they do have positive impacts for families, communities and entire economies. They are associated with increased household spending on education, improved nutrition and decreases in child labor; they also increase resilience to natural disasters and present unique  opportunities for financial inclusion. Since the Covid-19 pandemic emerged, remittances have been affected by unemployment, closures and illness, but they remain more important than ever to the households that depend on them.

Given the scale and importance of remittances, it is surprising that governments currently lack robust and transparent methodologies to identify and report these flows. Reliable remittance data is important for informed policymaking and financial planning, especially as economies struggle in light of the Covid-19 pandemic. It is also a financial security tool, enabling countries to supervise formal remittances and curtail informal remittances, which present risks in terms of illicit financial flows. Lack of reliable official data contributes to persistent and often unwarranted claims that remittances are an unsavory business, and perhaps most importantly, it presents risks for consumer financial protection.

In examining some of the challenges in remittance data, it is possible to identify gaps and inconsistencies, with examples from Latin America, the Caribbean and other parts of the world. These gaps are a concern in terms of policymaking, transparency, security and consumer financial protection. Indeed, by analyzing remittance reporting as a governance issue, and ultimately, a consumer protection issue, it is clear that better remittance data is critically needed on many levels.

Why Transparent, Reliable Remittance Data Is Needed for Country Governance

Transparent, consistent remittance reporting is key for good governance. Adequate data, even if not ever totally complete, allows for reliable estimates that inform public policy and address security risks. An example of this is Global Financial Integrity’s work on international trade data, where trade information is analyzed to identify misinvoicing between country trading partners. Of course, this type of analysis requires detailed country reporting as a starting point.

Unfortunately, remittance reporting is widely recognized to be a challenge, and suffers from gaps, discrepancies and inconsistencies across countries. As the World Bank has noted, “numerous factors explain the difference between total inflows and outflows, including better monitoring of inflows, and possible under-reporting of outflows.” This may include serious problems such as money laundering, but can also be much more innocuous, such as including small amounts of cross-border trade, especially of services, or undercounting informal cash and in-kind remittances, such as parcels of clothing or food. For example, due to the current political situation in Venezuela, anecdotal evidence has shown that some money has flowed to Colombia, where it is partially converted to goods and then moved across the border to recipients in Venezuela.

To capture accurate information, countries must adopt consistent standards regardless of whether they are a net sender or net recipient of remittances. Standards also need to account for third countries involved in transactions. If not, they may end up double counting for amounts that travel through a middle country’s financial system on both the inflows and outflows. Moreover, standards must allow for information sharing on a per-corridor-basis so they can provide much needed transparency and data.

To move towards better remittance data, it’s helpful to consider three points of reference: guidance from the International Monetary Fund’s (IMF) on the Balance of Payments, recommendations from the Basel Committee on Banking Supervision, and actual implementation practices by countries.

The Balance of Payments, which serves as a record of economic transactions between a country and the rest of the world for a specific period of time, is the cornerstone for official remittance reporting. The IMF’s Balance of Payments guidance aims to ensure that countries around the world use consistent and comparable methodologies when measuring and reporting key economic indicators. Yet the IMF, the entity that sets many of these standards, has recognized that “despite the high level of interest in remittances, evidence suggests that data on remittances are less reliable than are data on many other items in the balance of payments.”

While the IMF uses an expansive definition, it does not define remittances in terms of migration per se, and, by its own admission, its definition is “somewhat broader than those resulting from movement of persons, because they are not based on the concepts of migration, employment or family relationships.” Despite attempts to standardize reporting through implementation of the IMF guidelines, actual measurement methodologies vary widely.

In the United States, for example, official data places US-outbound “personal transfers” at US$49 billion, which is widely considered to be inaccurate, and contrasts with estimates by multilaterals, think tanks and other governments, which put the figure closer to US$67-68 billion.  Moreover, according to the US Government Accountability Office, “existing data do not allow Treasury to identify remittances transferred through banking and non-banking channels. Remittance data that US agencies collect from banks do not include transfers that banks make on behalf of money transmitters. Additionally, the information Treasury collects on transportation of cash from US ports of exit does not identify remittances sent as cash.” These methodological challenges limit the ability of the United States to effectively measure outbound remittances through official government sources. Considering that the United States is the largest single source for outbound remittances worldwide, that is a big problem.

Remittance recipient countries struggle as well. The most dramatic case is Nigeria, where the difference between government-reported incoming remittance data and industry-estimated data amounted to at least US$16 billion per year. Meanwhile, Nigerian Central Bank officials have voiced doubts about their own remittance data, suggesting that the value  might be off by as much as a factor of ten, from US$26 billion to US$2.6 billion a year.

In Latin America as well, measuring remittances and differentiating them from other transactions has proven difficult for Central Banks. The graphic below presents the case of Mexico, the single largest remittance recipient country in the region. Though remittances represent a major financial inflow — the country received US$36 billion last year — the methodology and sources behind official government reporting are not readily available. 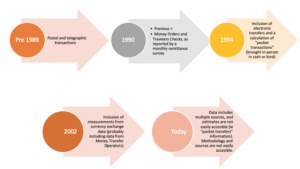 A second point of reference for remittance data is The Basel Committee on Banking Supervision, a standards-setting body that works with a group of Central Banks. The Committee is an example of the benefits of global forums on transnational financial issues and how to address them. In 2007, for example, it’s Committee on Payment and Settlement Systems and the World Bank published General Principles for International Remittances Services, with two key takeaways: 1) the lack of transparency and understanding of these financial flows, and 2) the need to establish infrastructure and guidelines specific to remittances. The guidelines provided are very relevant, even 12 years later.

In addition to the IMF and Basil Committee guidance, some countries have put into practice remittance measurement methods that serve as a useful point of reference. For example, some governments have opted to incorporate industry data as part of official remittance reporting. However, not all countries have decided to do so, adding to the problem of lack of comparability. There seems to be no standard on how to incorporate such data in official reporting, and even in cases where this data is reported and seems to be in use, details on this fact are not available as part of the documentation that accompanies reports. Countries such as Mexico, Costa Rica and El Salvador, require industry reports and are likely using the data towards official reporting. However, none of the notes on their balance of payments state this, or provide a description of how it is used.

That said, analyzing industry data offers benefits, according to countries that have opted for this approach.

When the Central Bank of Italy “introduced a new data gathering system based on information from money transfer operators on customers’ gross remittance transfers,” it found that, “the new system has greatly improved data quality and is a methodological landmark internationally.”

In summary, standardized measurements that build upon existing guidelines but incorporate available data, including industry data, as part of robust and transparent methodologies, can significantly improve the reliability and standardization of remittance data.

Why Transparent, Reliable Remittance Data Is Needed for Consumer Protection

At the same time, transparency measures by governments can greatly benefit consumers who send and/or receive remittances. Access to information about registered remittance service providers can help consumers choose formal options, thereby reducing the risk of losing their money or potentially engaging with businesses of ill repute.

Two key measures are public registries of remittance service providers, and clear Anti-Money Laundering/Combating the Financing of Terrorism (AML/CFT) frameworks. When the list of licensed companies is made publicly available, consumers can use this information to choose reliable, formal and legally supervised companies. In fact, the Financial Action Task Force (FATF) specifically recommends “making a comprehensive and up-to-date list of all licensed or registered persons that provide money or value transfer services publicly available.” In the Latin American context, countries such as Jamaica, Dominican Republic  and El Salvador provide this information to consumers.

Going one step further, governments can provide information about where registered remittance agents are located. In this sense, Jamaica stands out for its good practices. The Jamaican Central Bank not only publishes licensed remittance agents, but also their location by parish. This provides important information to consumers and can also be leveraged for financial inclusion purposes.

Governments should also clearly and thoughtfully place remittances within existing AML/CFT regulations, which is ultimately a form of consumer protection and financial inclusion. Appropriate regulation should keep consumers’ money safe, prevent financial crimes and yet not place undue burden on low income, financially excluded consumers. As the FATF has noted, remittances “may be many customers’ first or only interaction with the financial sector. Therefore, a well-designed and functioning AML/CFT policy and supervisory framework for money and value transfer services may foster greater financial inclusion.”

Unfortunately, this is easier said than done. From the sending side, remittance service providers are not necessarily banks — though in some cases, they include banks — and thus, it is important to find appropriate balance in terms of AML/CFT supervision. Since the providers generally operate in small transactions, do not take deposits, and provide financial access to a vulnerable population segment, countries may opt for a simplified approach. While that is reasonable, what is important is clarity in the approach, ensuring that consumers have access to safe and reliable money transfer options. From the remittance recipient side, many of the same challenges exist. If paying institutions are banks, regulations are generally clear. However, many remittance payers, particularly in Latin America and the Caribbean, are not banks, and thus end up in a regulatory grey area.

In light of these challenges, it’s important for governments to act on improving data and reporting. Remittances have many positive impacts both socially and economically, but better data and reporting are needed to fully leverage their impacts for development, simultaneously strengthening governance and consumer protection.

Julia Yansura (@JYansura) is the Latin America Research Analyst for Global Financial Integrity. She is the author of many reports and studies on remittances, including Confronting the Challenges of Migration and Development in Central America. She previously supervised a project on financial inclusion for remittance recipients in Guatemala.