Dealers are the most important actors in the illicit supply chain

WASHINGTON, DC – Criminal networks of poachers, suppliers, dealers, wholesalers, and consumers make up the multi-million dollar industry in live great apes, their bushmeat, and their body parts, and investigators are missing intelligence and enforcement opportunities on these illicit financial flows, according to a study released today by Global Financial Integrity (GFI), a Washington, DC-based research and advisory organization.

The live trade is the most significant in terms of value, and the markets for bushmeat and body parts are linked with the highest impact on the survival of the four species—bonobos, chimpanzees, and gorillas in Africa and orangutans in Indonesia and Malaysia, all of which are endangered species. Dealers are the most important actors in the illicit supply chain, typically earning the greatest profit compared to other participants. Thousands of bonobos, chimpanzees, and gorillas are killed each year to fill the demand for pets and attractions, bushmeat, and ceremonial body parts, generating significant revenue for those who make up the illicit supply chains. Orangutans on the islands of Sumatra and Borneo in Indonesia and Malaysia—Asia’s only great apes—are losing their battle for survival due to habitat destruction from commercial plantations, the killing of adults of the species, and the selling of orphaned infants on the black market.

“Like all transnational organized crime, the illegal great ape trade is overwhelmingly profit-motivated, and the collection of strong financial intelligence as well as the involvement of the financial sector is a crucial component in shutting down the trade,” said GFI Analyst Channing May Mavrellis. “For the illegal trade in great apes as well as the illegal wildlife trade as a whole, attention has often been directed to the ends of the supply chain—the poaching incident and the final consumer purchase—both in terms of intelligence as well as intervention. What remains relatively murky is what goes on in between, that is the “business” of the trade, and more importantly the financial side of the business.” 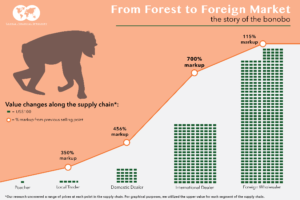 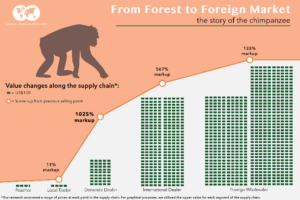 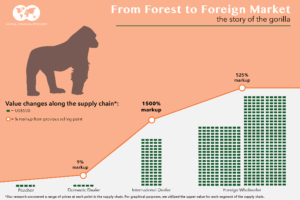 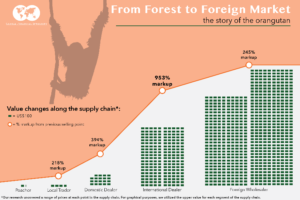 Methodology
To conduct the study, GFI compiled data based on publicly available documents, original interviews with experts, and special questionnaires to individuals and groups in Indonesia, Malaysia, and Central and West Africa. The report restricts estimates of market values to the international side for live bonobos, chimpanzees, and gorillas, because those transactions are the most consequential and have the most robust data. Data on bushmeat and body part sales are much more limited, so the estimates in the report lump bonobos, chimpanzees, and gorillas together; orangutans did not have sufficient data for this portion. The source of the estimates of the number of each species involved in the illegal live trade comes from Stolen Apes: The Illicit Trade in Chimpanzees, Gorillas, Bonobos and Orangutans by Daniel Stiles et al.; estimates for the number killed for the bushmeat and body part trade come from research by The Bushmeat Project.