WASHINGTON, DC – A new analysis of illicit financial flows (IFFs) due to trade misinvoicing in 148 developing countries demonstrates that trade-related IFFs appear to be both significant and persistent features of developing country trade with advanced economies. As such, trade misinvoicing remains an obstacle to achieving sustainable and equitable growth in the developing world. This update, titled Illicit Financial Flows to and from 148 Developing Countries: 2006-2015, is the latest in a series of Global Financial Integrity (GFI) reports which provide country-level estimates of the illicit flows of money into and out of 148 developing and emerging market nations as a result of their trade in goods with advanced economies.

IFFs are defined as money that is illegally earned, used or moved and which crosses an international border. Trade misinvoicing is a method of moving IFFs, and includes the deliberate misrepresentation of the value of imports or exports in order to evade customs duties and VAT taxes, launder the proceeds of criminal activity or to hide offshore the proceeds of legitimate trade transactions, among other motivations. 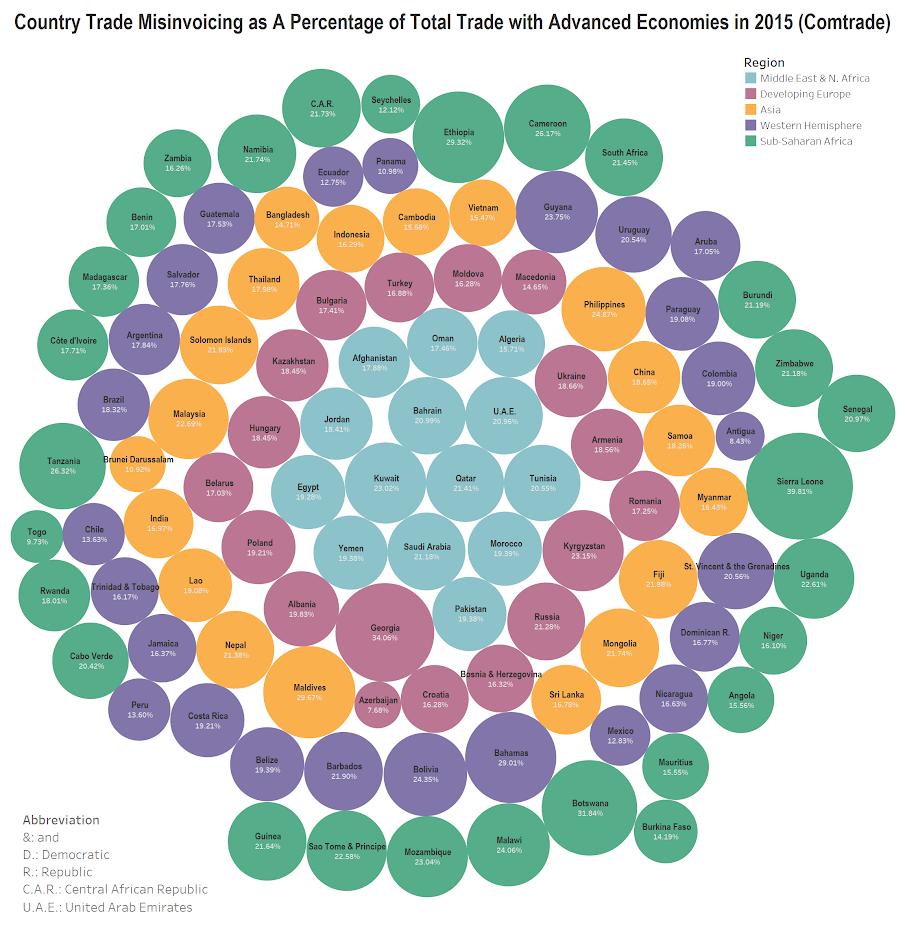 Increasing trade among developing and emerging market countries is seen by many economists as a primary path to greater development. However, high levels of misinvoicing, as a percentage of total trade, indicate that most developing country governments do not benefit from a significant portion of their international trade transactions with advanced economies. Highlights of GFI’s research for 2015 (the most recent year for which there is usable data) show that:

In addition to updating the estimated IFFs GFI has presented in the past, this report widens the scope of its research and uses a more detailed database published by United Nations (UN) Comtrade along with updated measures from the International Monetary Fund (IMF) data it has used previously. This report presents estimates of IFFs based on both data sets.

While the Comtrade data set is more detailed, not all countries provide their trade data to the UN and therefore are not represented in this analysis. Many of the 44 nations that do not report trade transactions to the UN are small states, however a few non-reporting countries have substantial economies including Kenya, Nigeria and Venezuela. Trade-related illicit flows for these nations (and the other 41 countries not reporting to the UN) can be found in the report using the IMF’s Direction of Trade Statistics data set (see Appendix Table III-1).