HomeBlogCorruptionPrescription for Chaos: Corruption and Mismanagement of the Covid-19 Pandemic in Peru

Prescription for Chaos: Corruption and Mismanagement of the Covid-19 Pandemic in Peru 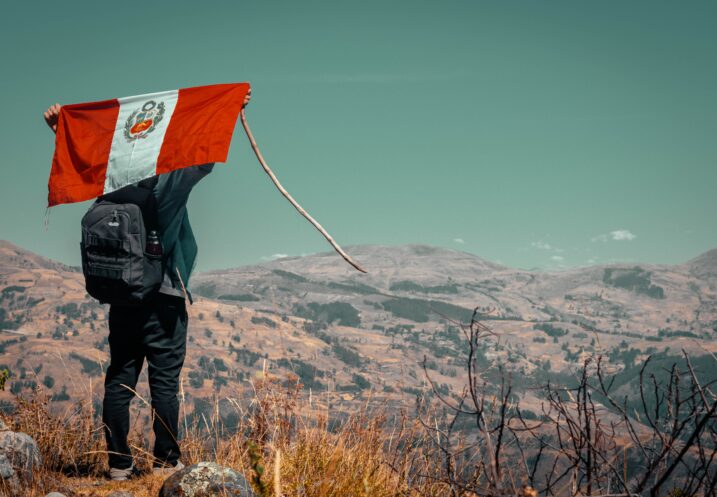 Latin America has been one of the most affected regions by the pandemic and the systemic corruption from governments has played a key role deepening its consequences. Peru, a country that led the world in Covid-19 fatalities during the first half of 2021, was no exception. In the midst of the crisis, families were seen desperately looking for ICU beds, medicine, equipment or oxygen, despite the efforts of the government to approve fast track purchases, among other measures.

Experts have quickly pointed out structural and institutional causes that explain why the region was so strongly impacted. The Covid-19 pandemic came to Peru in a time where the healthcare system was already in crisis due to the lack of adequate infrastructure and equipment, shortage of professionals, and bureaucratic procedures plagued by corruption. These factors were further exacerbated during the onset of the virus in March 2020.

The collapse of the Peruvian healthcare system is an issue that draws special attention considering dozens of hospital construction projects are currently paralyzed due to corruption prosecutions.

Globally, billions of dollars in public health expenditures are lost each year due to corruption. This has serious consequences for the access, quality, efficiency and effectiveness of health services, especially for those of lower socioeconomic sectors who depend entirely on the public health system for their medical care. Unfortunately, Peru is no stranger to this matter. In 2014, the then President of the Council of Ministers pointed out that “with the money that is lost in acts of corruption, 72 hospitals could have been built.” Today, even though the government has a budget of US$ 972.7 million for 29 projects to improve hospital infrastructure, none of these projects have exceeded 60% completion, as shown in the graphic below, due in large part to corruption. In at least four regions there are medical construction projects with almost ten years of delays. This became disastrous when the government urgently needed hospitals for Covid-19 patients. 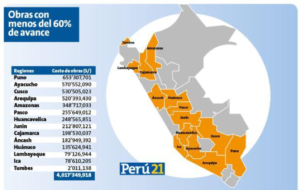 For instance, in the region of Cusco, construction of the Antonio Lorena Hospital started in April 2013 with an initial cost of US$46.2 million and sought to benefit almost half a million people. The construction was due to be completed in October 2014, but as of 2020 it was only 64% finished. The Antonio Lonera hospital is one of the projects that is delayed due to acts of corruption by the Brazilian construction companies involved in Lava Jato due to a payment of US$3.6 million in bribes related to this hospital. This directly affected the capacity to deal with the pandemic in Cusco, where authorities had to utilize part of the hospital for critical patients, even though construction was not finished. A government comptroller suggested that “if the new hospital had been finished, the response [against Covid-19] would have been better. We would not have had to make these additional investments of 1.6 million in the purchase of equipment.”

Another striking example is the Pedro Sánchez Meza Hospital in the region of Junin. The completion of this hospital, valued at more than US$18.6 million, was a campaign promise of Junin’s previous regional governor, Vladimir Cerrón in 2019. As of 2021, the work is at 5% progress and the companies that won million-dollar bids for its construction are linked to the case in which the former governor was sentenced for corruption.

Junin and Cusco are only two examples of a larger pattern that is occurring across the country. What could have been done and still needs to be implemented to avoid corruption from worsening the response towards a public health crisis?

(i) Prevention needs to play a key role

Prevention continues to be a weakness within the anti-corruption system. Some efforts have been made, such as the implementation of concurrent control, a new method of monitoring public projects and addressing corruption risks.  The absence of a compliance program has also been added as a crime in the Peruvian Criminal Code. However, these actions are not enough to fully address the problem.

Going forward, the country should strengthen its beneficial ownership registry to facilitate transparency. Being able to identify the real person behind the companies that implement the infrastructure works would be a major improvement. Even though Peru passed legislation on the topic in 2019, the registry experiences deficiencies and there is no clear guidance on how information should be updated despite being an obligation required by law. The legislation is already in place, but there is a lack of political will and resources to implement it properly.

Technology should be used as a transparency tool in infrastructure projects to help to monitor social services and make financial information more transparent. Oftentimes, budget execution in health is a nest for corruption due to extensive and complex budgets that can lead to embezzlement, bribery and fraud. This worsens when infrastructure works get stalled, since the designated money is not spent and can easily end up embezzled or used for bribes.

Peru should consider incorporating mechanisms that facilitate the monitoring, control and detection of misuse of public resources. Moreover, transparent inter-institutional collaboration is needed, not only to supervise, but also to be more efficient. Some valuable efforts have been launched by Peru’s general comptroller such as Infobras, a website that allows citizens to monitor the status of public works.

In an ideal scenario, an effective prevention and control system will prevent corruption from occurring in the construction of hospitals or any other infrastructure project. One question remains for those projects that have already been implicated in corruption cases. Is there a better way to deal with paralyzed projects that were unfortunately tainted by corruption?

What currently happens in most countries in Latin America and the Caribbean, including Peru, is the absolute voiding of these contracts, but it is arguably not the best legal and social alternative as it generates economic costs for society and economic development. Alternative measures should be sought to sanction construction companies that do not play fair and ban them from participating in future tenders, without having to completely hold back ongoing projects.

Corruption is devastating for the development of public health and in 2020 it claimed thousands of lives that could have been saved had it not been for the hundreds of abandoned, unfinished hospitals. It is crucial that Peru begins investing in prevention, fiscalization, and transparency technologies while also considering ways to address stalled projects. With these steps, Peru will be better prepared to face future crises, whenever they emerge.

Camila Fernandez Tovar is a Summer-Winter 2021 Latin American Intern with Global Financial Integrity and has a bachelor’s degree in Law at Universidad de Lima.