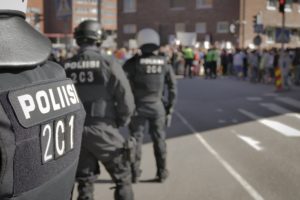 Law enforcement operations often focus predominantly on interdicting the physical objects—like bags of cocaine or boxes of counterfeit Rolexes—being smuggled by criminals, rather than tracking and seizing the money being earned by the criminal networks.

GFI believes that effective law enforcement requires following the money and making it more difficult to launder illicit proceeds. Across all the illicit industries and security threats—from arms trafficking to illicit timber to terrorism—money is the most common thread. Making it more difficult to move and hide illicit money is an overarching solution to the source of all of these problems, which are often approached as separate issues by law enforcement.

What Are the Biggest Illicit Industries?

This March 2017 report from Global Financial Integrity, “Transnational Crime and the Developing World,” finds that globally the business of transnational crime is valued at an average of $1.6 trillion to $2.2 trillion annually. The study evaluates the overall size of criminal markets in 11 categories: the trafficking of drugs, arms, humans, human organs, and cultural property; counterfeiting, illegal wildlife crime, illegal fishing, illegal logging, illegal mining, and crude oil theft. Counterfeiting ($923 billion to $1.13 trillion) and drug trafficking ($426 billion to $652 billion) have the highest and second-highest values, respectively; illegal logging is the most valuable natural resource crime ($52 billion to $157 billion).

The combination of high profits and low risks for perpetrators of transnational crime and the support of a global shadow financial system perpetuate and drive these abuses. The report also emphasizes how transnational crime undermines economies, societies, and governments in developing countries. National and global policy efforts that focus on curtailing the money are needed to more successfully combat these crimes and the illicit networks perpetrating them.

How Do Criminals Move Money?

Generally, transnational criminals move money the same way that tax evaders or corrupt public officials do. Some, like notorious arms trader Viktor Bout (portrayed by Nicholas Cage in the 2005 movie Lord of War), use a web of anonymous shell companies to hide assets. Others, like the Colombian drug cartel exporting stuffed animals out of Los Angeles, utilize trade-based money laundering.

What about Terrorist Financing?

The line between criminal network and terrorist network has become increasingly blurry in recent years. Terrorists often finance their operations by selling drugs, poaching rhinos, or counterfeiting goods. They participate in the same networks and use the same mechanisms to move illicit money.