GFI: Indonesia lost US$6.5 billion to Trade Misinvoicing in 2016; Revenue needed for SDGs 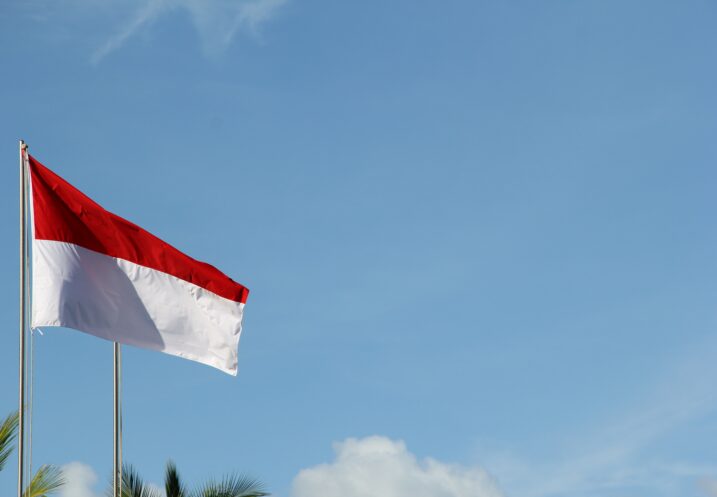 For example, if China reports a shipment of US$3 million worth of plastics to Indonesia, but Indonesia only reports $US2 million worth of plastics received from China, then either the exporter on the Chinese side has committed export over-invoicing, or the importer on the Indonesian side has engaged in import under-invoicing. This could be done as a way to launder money into Indonesia, or to avoid paying corporate income taxes on the importing side. Trade misinvoicing is easily preventable using tools like GFI’s GFTrade, which tracks recent trade prices and enables customs officials to check invoices for fraud in real time.

In order to conduct this analysis, GFI utilizes data published by the United Nations Comtrade database. By analyzing the export data of all trade partners with Indonesia as well as Indonesia’s import data, GFI was able to estimate the overall trade gap between what Indonesia reports as having exported/imported, and what its trading partners report as exporting/importing to/from Indonesia.

GFI estimates that the value of misinvoiced Indonesian goods equals US$38.5 billion, equivalent to 13.7 percent of Indonesia’s total trade in 2016 (US$ 280.2 billion). To estimate revenue losses, GFI applied the existing VAT taxes, customs duties, royalties and company income taxes to the instances where misinvoicing occurred. This resulted in estimated revenue losses to the Indonesian government of approximately US$6.5 billion. Next, GFI examined the HS product codes to determine which goods were the most frequently misinvoiced and which countries they came from. GFI found that essential oils from Singapore, plastics from China and vehicles from both Japan and China were the goods at the greatest risk for trade misinvoicing for 2016. 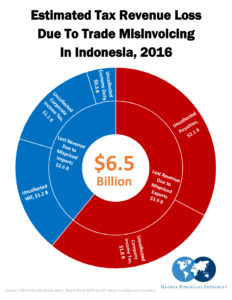 What could Indonesia have done with US$6.5 billion?

The US$6.5 billion Indonesia lost to trade misinvoicing in 2016 is revenue that could have been spent towards achieving the internationally-agreed upon Sustainable Development Goals (SDGs) and making investments in health, education and infrastructure. The SDGs are a list of 17 United Nations goals calling for development in topics ranging from poverty to climate action. According to the Institute of Southeast Asian Studies, Indonesia planned to spend US$131 billion  on the SDG targets in 2016. Five percent of that (US$6.55 billion) was to be spent on health, six percent (US$7.86 billion) on food security, 15 percent (US$19.65 billion) on infrastructure, 20 percent (US$26.2 billion) on education and the remaining 54 percent (US$70.74 billion) on other expenditures. Indonesia’s 2019 voluntary national report regarding the SDGs cited poverty reduction (SDG 1), basic services improvement (SDGs 3 and 4), reducing regional disparities and inequalities (SDG 10) through infrastructure development (SDG 9), increasing economic value and job creation (SDG 8) and climate action (SDG 13) as its remaining issues and priorities.

If Indonesia had not lost that US$6.5 billion to trade misinvoicing, it could have redirected these resources to increasing its spending on the SDGs. For example, in 2016 Indonesia could have expanded its budget in all of the above aspects. This would have led to an additional US$325 million to spend on health (SDG 3), US$390 million on food security (SDG 2), US$975 million on infrastructure (SDG 9), US$1.3 billion on education (SDG 4) and the remaining US$3.51 billion for other expenditures.

Alternatively, Indonesia could have invested the extra revenue in other areas in need of funds and split the funding between Indonesia’s development initiatives. Keeping with Indonesia’s previous budget plan from the year of 2016, most of the lost US$6.5 billion could have been spent on education, infrastructure and job growth, while the remainder could have been spent on basic services, like health and food security. Building on the same spending priorities in its previous budget plan, Indonesia could have spent an additional US$2.8 billion on education, US$2.1 billion on infrastructure and job growth, US$700 million on health and US$850 million on food security.

Additionally, an International Monetary Fund (IMF) report from January 2019 estimated that Indonesia needs to spend an additional 5.6% of GDP (approximately US$57 billion) in order to achieve the SDGs by 2030. The IMF suggested Indonesia increase taxes in order to raise this revenue. However, Indonesia could also raise some of these needed funds by cracking down on trade misinvoicing and capturing some of this much needed revenue that is regularly being lost. Additionally, by regaining this amount of lost revenue annually for the next 10 years, Indonesia could raise more than the US$57 billion the IMF says is necessary to achieve its SDGs by 2030.

Ben Iorio is an Economics student at the University of Michigan and a GFI Summer 2019 Intern.