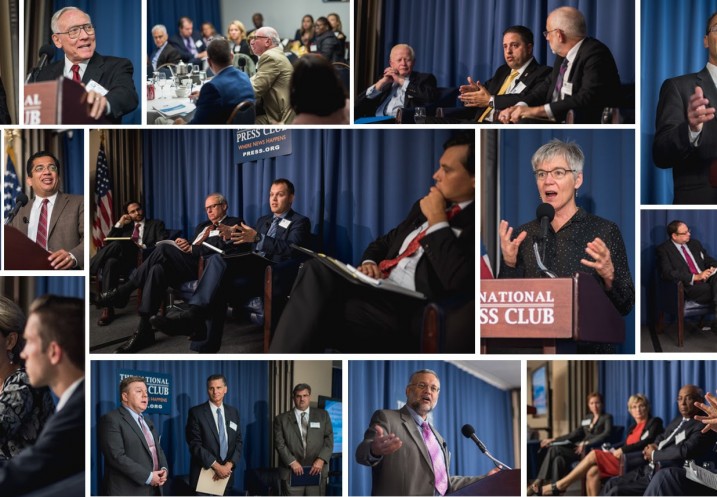 Global Financial Integrity is pleased to present GFI Engages, a quarterly newsletter created to highlight events at GFI and in the world of illicit financial flows. We look forward to keeping you updated on our research, advocacy, high level engagement, and media presence. The following items represent just a fraction of what GFI has been up to since June, so make sure to check our website for frequent updates.

Based on the culmination of work GFI has done with the support of the Ford Foundation including a book by GFI, the conference included discussions and keynote remarks from experts on the nature of IFFs, country-level perspectives, and how and why curtailing these IFFs should be a priority for the global community.
Panelists and speakers included:

On Thursday, September 10, 2015, Global Financial Integrity held a book launch for its recent report Flight Capital and Illicit Financial Flows to and from Myanmar: 1960-2013 at the National Press Club in Washington, DC. The event featured a brief presentation of the report and its findings by GFI Chief Economist Dr. Dev Kar, followed by a panel discussion with Vikram Nehru of the Carnegie Endowment for International Peace and Aaretti Siitonen of the Embassy of Finland. A question & answer period followed the discussion.

Global Financial Integrity applauds the official adoption of the Sustainable Development Goals (SDGs) by the UN General Assembly last week in New York. This marks the first time that illicit financial flows—which are estimated at close to $1 trillion per year—are considered a part of the development equation. Target 16.4 of the agenda includes a goal to “reduce illicit financial and arms flows, strengthen the recovery and return of stolen assets and combat all forms of organized crime” by 2030.

GFI Policy Counsel Liz Confalone and Legal Counsel & Director of Government Affairs Heather Lowe have been busy this quarter with meetings with Members of the U.S. House of Representative, educating them on the importance of beneficial ownership information in light of House hearings on the financing of terrorism, where the topic was repeatedly raised. Heather has also continued to work with the B-Team to engage business leaders on the subject, with productive meetings in New York.

In addition to advocacy on beneficial ownership, Ms. Lowe and Ms. Confalone have begun to counter anti-base erosion and profit shifting (BEPS) messaging that is beginning to circulate around the U.S. Congress in an effort to prevent the U.S. from stalling vital global action needed to curtail offshore profit shifting.

As Ms. Lowe prepares to take over the Chairmanship of the Financial Transparency Coalition (FTC) in October, she has been hard at work preparing the FTC’s 2016 Work Plan with GFI’s FTC colleagues around the world. She is looking forward to a productive tenure working with organizations around the world to combat illicit financial flows.

The GFI Team spent a significant amount of this quarter working closely with a developing country government to stem trade-related IFFs, and we look forward to continuing that engagement.

On September 28th, 2015 GFI Managing Director Tom Cardamone served as a panelist for a Side Event for the UN summit in New York. The panel, organized by the European Commission, was titled Collect More – Spend Better: A Contribution to the 2030 Agenda for Sustainable Devleoplemt. Mr. Cardamone addressed the challenges that tax evasion, tax avoidance and illicit financial flows pose for development.  The discussion was moderated by Klaus Rudischhauser, the Deputy Director-General for Internatioanl Cooperation and Development, European Commission. Other panelists included:

On September 16th and 17th, the OECD held its fourth Forum on Tax and Crime. Hosted by the Netherlands Tax and Customs Administration, the Forum drew over 200 senior officials and specialists from over 70 countries and international organizations who came together to address priority issues that cut across disciplines and national borders. The discussions at the Forum showed the continued threat posed by tax crimes and other financial crimes and the important role tax administrations can play in curtailing it, recovering the proceeds and bringing criminals to justice. The President of GFI, Raymond Baker, gave a presentation on the 17th titled “Financing for Development: Enabling developing countries to tackle illicit flows.”

GFI’s recent report Flight Capital and illicit financial flows to and from Myanmar: 1960-2013 examines the impact of Illicit Financial Flows on Myanmar’s development. The chart above examines the link between Myanmar’s underground economy, IFFs and Capital Flight. We find that as a percent of GDP, the underground economy remained relatively stable throughout the 1960s and 1970s, before spiking upwards sharply in the 1980s. It returned to a more normal level in the 1990s and increased in the 2000s. The red bars in the chart represent the ten-year average shares of the underground economy to GDP, except for the 2010-2013 period, during which the share declined as a result of political and economic reform. If sustained, such policies bode well for the country’s future.