Transnational crimes generate US$1.6 trillion to US$2.2 trillion annually

In 2017, Global Financial Integrity (GFI) did a study on transnational crime and found that the combined annual value of 11 different transnational criminal markets was between US$1.6 trillion to US$2.2 trillion. Groups including the FARC, the so-called Islamic State, the Lord’s Resistance Army, and political regimes such as Nicolas Maduro’s in Venezuela that operate as a transnational organized criminal network all utilize these lucrative criminal markets to line their pockets, consolidate power, perpetuate violence, and directly harm the safety and security of US government interests. Anonymous companies play an important role in transnational crime, allowing criminals to hide their identities, obscure their illicit activities, and launder their ill-gotten gains. 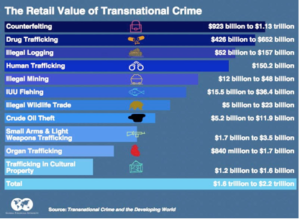 What is an Anonymous Company?

An anonymous company is a company or a series of companies that have disguised their ownership in order to operate without scrutiny from law enforcement and the public. These “phantom firms” can open bank accounts and wire money like any other company, making them a favorite tool for criminals, money launderers, drug traffickers, illegal weapons dealers, and terrorists that seek to harm US economic and national security interests.

The Maduro regime in Venezuela has stolen US$1.2 billion from the Venezuelan economy by looting the national oil company and through forex manipulation. The proceeds from these schemes have been invested into real estate and show horses in Florida and luxury apartments in Manhattan, all owned through anonymous companies.

Anonymous companies have also been used to enable human trafficking. A 2018 report from nonprofit group Polaris recently investigated how corporate secrecy facilitates human trafficking in illicit massage parlors, estimating there are over 9,000 of such establishments in the United States.

Illegal gold mining from Latin America is tied to narco-traffickers, sex trafficking, and environmental devastation. U.S. companies have used front anonymous companies to engage in this gold business and Miami has been the epicenter for a US$3.6 billion money laundering scheme.

US$52 billion to US157 billion annually

Charles Taylor, the former president of Liberia and convicted war criminal, used the illegal trade in timber to carry out war crimes, crimes against humanity and other serious violations of international humanitarian law, including pillage, murder, rape, and the use of child soldiers. The proceeds from these crimes were funneled through New York bank accounts using a network of anonymous companies.

There Is a Bipartisan Legislative Solution

Rep. Carolyn Maloney (D-NY) and Rep. Peter King (R-NY) recently introduced the Corporate Transparency Act of 2019 [H.R.2513]. The bill would require American companies to disclose their beneficial owner(s) to the Financial Crimes Enforcement Network when they incorporate, and keep their ownership information up to-do-date. Establishing company ownership disclosure in the United States would be a vital tool to help law enforcement combat terrorism, criminal activity, and other threats, while imposing little undue burden on American businesses and their owners.

Both bills demonstrate that there is strong bipartisan support for ending anonymous companies as a conduit for funneling and safeguarding illicit financial flows within the United States financial system.