GFI worked with the coalition of NGOs to analyze the classification of the wood pulp as well as its movement between jurisdiction to determine any potential trade misinvoicing schemes that could be involved.

The purpose of this report is to provide the Government of Indonesia and other stakeholders with a detailed analysis of profit shifting practices in the nation’s pulp industry. These practices appear to have resulted in the movement of substantial taxable profits generated within Indonesia to at least one offshore tax haven. The use of offshore tax havens by corporate actors has contributed to Indonesia’s low tax collection rates, which limit the country’s potential to fund infrastructure development, social welfare programs, pandemic response, and other fiscal priorities of the Government.

A comparison of trade statistics compiled, respectively, by the governments of Indonesia and China highlights major discrepancies in the trade of dissolving pulp, a specialized grade of wood pulp used in the manufacture of textile products. Between 2007 and 2018, China imported over 2.0 million tons of dissolving pulp from Indonesia, according to China’s customs data, as reported to the United Nations Commodity Trade Statistics Database. However, Indonesia only exported to China approximately 400,000 tons of dissolving pulp during that same period, 2007–2018, according to official trade data prepared by the Government of Indonesia’s Central Statistics Bureau. 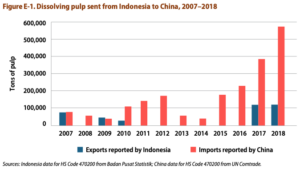 By analyzing the mismatch in trade data reported by Indonesia and China for the same trade flow, this report documents the apparent use of profit shifting practices by PT Toba Pulp Lestari Tbk (herafter Toba Pulp), a publicly listed company which operates a mill in North Sumatra capable of producing both dissolving pulp and paper-grade pulp. During 2007–2016, Toba Pulp apparently reported exports of dissolving pulp as lower-value paper-grade pulp when it was sold to an affiliated marketing company in Macao. The Macao company apparently then re-invoiced the shipments as dissolving pulp and sold them at substantially higher prices to buyers in China. The apparent use of profit shifting practices by Toba Pulp was first reported in a series of news articles published in February 2020 by a consortium of Indonesian media outlets under the banner of IndonesiaLeaks. Toba Pulp has claimed that its exports during this period were classified “in accordance with the product classification and legal jurisdictions”; and the company’s response to these articles is in Appendix A.

Through analysis of gaps in trade data, audited financial statements, and other reports released by the company and its affiliates, this report estimates that Toba Pulp’s use of this profit shifting arrangement apparently had the effect of under-stating the company’s revenues in Indonesia by approximately US$ 426 million (Rp. 4.23 trillion) during the decade 2007–2016. In hypothetical terms, if taxed at the contemporary statutory corporate tax rates, which ranged between 25% and 30% during this period, this amount of revenue may have generated an additional US$ 108 million (Rp. 1.07 trillion) in corporate tax paid to the Government of Indonesia. The report makes no claim, however, that these figures reflect Toba Pulp’s particular tax situation or its effective tax rate.

In response to this report’s summary of findings, Toba Pulp stated, “Regarding the allegation of profit shifting, the Company [Toba Pulp] has produced and sold products at an appropriate price and every year an assessment of appropriate product prices is carried out by an independent consultant. [. . .] As a public company whose shares have been listed on the Indonesia Stock Exchange since 1990, the Company always upholds Good Corporate Governance and remains committed to carrying out operational activities in accordance with the prevailing laws and regulations.”

Toba Pulp’s apparent use of the profit shifting practices documented in this report seems to have ended in early 2017, when it resumed issuing periodic public announcements disclosing the type of product its mill is producing.

Indications of similar profit shifting by the APRIL Group

The report further analyzes the reported sales of dissolving pulp by Asia Pacific Resources International Limited (hereafter the APRIL Group), Indonesia’s second largest pulp producer, which is controlled by the same beneficial owner as Toba Pulp. APRIL has acknowledged producing over 800,000 tons of dissolving pulp during 2016–2018, and there are strong indications that most of this was exported to viscose staple fiber mills in China operated by APRIL-affiliate Sateri. Yet trade data prepared by the Government of Indonesia that were analyzed for this study do not appear to record any dissolving pulp exports from APRIL, its main operating companies, or its known subsidiaries during this period. These and other findings indicate that APRIL apparently used profit shifting practices during these three years that were similar in structure and effect to the ones apparently used by Toba Pulp during the period 2007–2016.

APRIL’s practices appear to have had the effect of under-stating the group’s revenues in Indonesia by approximately US$ 242 million (Rp. 3.35 trillion) during 2016–2018. In hypothetical terms, if taxed at the statutory corporate tax rate of 25%, this amount of revenue may have generated an additional US$ 60 million (Rp. 838 billion) in corporate tax paid to the Government of Indonesia. The report makes no claim, however, that these figures reflect either the particular tax situation or the effective tax rate of the APRIL Group, its main operating companies, or its known subsidiaries.

In response to this report’s summary of findings, the APRIL Group stated: “In 2016, RAPP [APRIL subsidiary, PT Riau Andalan Pulp & Paper] conducted a 2-year collaboration for the use and quality improvement of AE [Acacia Eucalyptus] Pulp with Sateri in China, with the hope that AE Pulp can be used as raw material for the viscose staple fiber industry. [. . .] Since the AE Pulp product was still in the trial development stage, RAPP was still using the HS Code for Kraft or HS Code 4703.290000 until the specifications of this AE Pulp product met the standards expected by the buyer.”

Since January 2019, it appears that APRIL has reported its exports of dissolving pulp under the appropriate product classification (HS 470200).

The findings presented in this report emerge at a time when the Government of Indonesia is attempting to improve revenue collection in order to fund ambitious infrastructure and social welfare programs and to fill a growing budget gap. The movement of taxable profits offshore has been a major contributor
to Indonesia’s low tax collection rate of 11% of GDP, which places it behind regional neighbors such

as Malaysia, Thailand, and the Philippines. In 2017, Finance Minister Sri Mulyani Indrawati set a target of increasing tax collection to 15% by 2020, and identified profit shifting practices that facilitate tax avoidance as an important regulatory and law enforcement challenge.

If the Directorate General of Taxation were to determine that Toba Pulp and/or the APRIL Group had understated taxable revenues in Indonesia, collection of these could represent a significant boost to tax collection. More importantly, it would send a powerful signal to Indonesia’s corporate sector that the Government will not tolerate profit shifting schemes that facilitate the transfer of profits generated within Indonesia to offshore jurisdictions.

This report does not allege that any of the companies or individuals named in this report have committed legal or regulatory violations in Indonesia or any other jurisdiction. Indeed, the use of profit shifting practices and the channeling of financial transactions through countries with low corporate tax rates are not necessarily illegal and may be legitimate, provided they are conducted in accordance with relevant laws and regulations. However, it is the opinion of the organizations publishing this report that the findings presented warrant careful scrutiny by the Government of Indonesia.

Recommendations for the Government of Indonesia

The coalition of civil society organizations publishing this report calls on the Government of Indonesia to implement the following recommendations: