In collaboration with the Economist Intelligence Unit and Cedetrabajo, GFI presents its latest report, ‘Illicit Financial Flows & Colombia.’ The report examines illicit financial flows such as gold smuggling, drug trafficking, trade fraud and grand corruption, and estimates the costs of these financial ills to Colombia’s national development agenda and its success in achieving the Sustainable Development Goals (SDGs).

Using United Nations trade data, Global Financial Integrity (GFI) analyzed the degree of trade misinvoicing in Colombia in 2016, finding a gap of $10.8 billion between the values reported by Colombia and those reported by all its trading partners. Furthermore, using value-added tax, customs duties, corporate income tax and royalty rates in Colombia, we estimate the Colombian government lost approximately US$2.8 billion in revenue due to trade misinvoicing in 2016. This amount is equivalent to roughly 5.2 percent of total Colombian tax revenues collected that year. 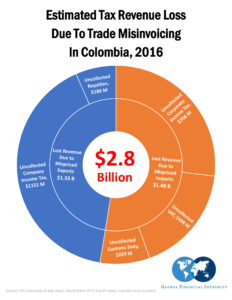 Further analysis shows that illicit outflows due to misinvoicing were US$6.1 billion in 2016 and illicit inflows were US$4.8 billion. The products most often associated with misinvoicing include mineral fuels, precious stones & metals and machinery, while the trading partner countries most often associated with misinvoiced trade transactions were the United States, China and Mexico.

The Economist Intelligence Unit’s (EIU) analysis of illicit financial flows in Colombia highlighted the primary sources of IFFs including trade misinvoicing, grand corruption, tax evasion, smuggling and transnational crime. EIU notes that each of these activities occurs in Colombia and that the informal economy in the country provides a favorable environment for illicit activities of many types. Additional factors—ranging from the cultural and geographic to institutional and economic—explain the scale of criminal activities in the country. The inefficiency of the legal system (which processes only five percent of crimes), the lack of effective state presence in vast areas of the national territory and the long-standing presence of illegally armed groups (leftist guerrillas, right-wing paramilitaries and other criminal organizations) and their involvement in numerous illicit activities, are among the principal factors behind the crimes that generate IFFs impacting Colombia.

In its opportunity cost analysis, GFI partner Cedetrabajo demonstrated how social programs highlighted in the National Development Plan (NDP) could benefit from additional resources. Using the NDP’s allocations of government funds as a guide for the hypothetical allocation of the US$2.8 billion in lost revenue to trade misinvoicing, additional resources could be distributed as follows: US$377.9 million for SDG 16 Peace, justice and strong institutions; US$358.1 million for SDG 3 Health & well-being; US$279.2 million for SDG 9 Industry, innovation and infrastructure; US$270.7 million for SDG 11 Sustainable cities and communities; and more for the remaining goals.

Given these findings GFI makes several recommendations with special emphasis on the following: