This February 2013 report from Global Financial Integrity, “Russia: Illicit Financial Flows and the Role of the Underground Economy,” finds that Russia lost at least US$211.5 billion in illicit outflows from 1994-2011.

The report also estimates the size of the Russian underground economy, looks a the Russia-Cyprus money laundering relationship, analyzes connections between capital flight and the price of oil, and much more. 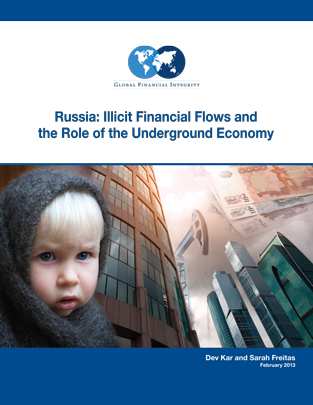 The Russian economy lost at least US$211.5 billion in illicit financial outflows from 1994 to 2011. These outflows represent the proceeds of crime, corruption, and tax evasion, and have serious negative consequences for the Russian economy.

63.8% of these illicit financial outflows, or US$135 billion, left Russia through unrecorded wire transactions, as measured by GFI’s Hot Money Narrow (HMN) model.

The report estimates the size of Russia’s underground economy–which includes, among other things, drug smuggling, arms trafficking, and human trafficking–at a massive 46% of GDP over the study period.

Illicit inflows and outflows were both found to drive the underground economy, which in turn drives illicit inflows and outflows. This feedback loop is described by Dr. Kar in the report as, “a snowballing effect, whereby both the underground economy and illicit flows continue to grow at an increasing rate until policy measures and institutions intervene.”

The report’s broader measure of capital flight, CED+GER, found that Russia lost a staggering US$782.5 billion in outflows from 1994-2011. This methodology is broader than the more conservative HMN+GER methodology, and may include some licit private sector flows of capital.

The price of oil was found to be a major driver of broader capital flight.

The report finds that Cyprus, a small island nation with a GDP of just US$23 billion, is both the largest source and destination of Russian foreign direct investment (FDI) from 2009-2011. Cyprus sent US$128.8 billion into Russia in 2011 alone, more than 5 times Cyprus’s GDP.

Dr. Kar notes that, “The recorded FDI positions merely reflect the round-tripping of prior illicit deposits from Russia into Cyprus,” making Cyprus a major money laundering machine for Russian criminals.