HomeReportsThe Drivers and Dynamics of Illicit Financial Flows from India: 1948-2008

The Drivers and Dynamics of Illicit Financial Flows from India: 1948-2008

“The Drivers and Dynamics of Illicit Financial Flows from India: 1948-2008,” released in November 2010 by Global Financial Integrity (GFI), estimates that tax evasion, crime, and corruption have removed gross illicit assets from India worth US$462 billion. The report also finds that the faster rates of economic growth since economic reform started in 1991 led to a deterioration of income distribution which led to more illicit flows from the country.

Moreover, the report finds that the poor state of governance is reflected in a growing underground economy which in turn has fueled more transfers of illicit capital from India. This analysis is cast in terms of a pre- and a post-reform period spanning a total of 61 years since independence. 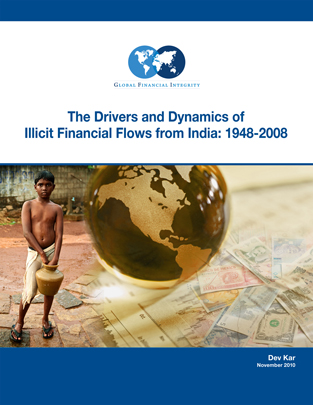 Adjusted Estimates: The present value of India’s total illicit financial flows (IFFs) is at least US$462 billion. This is based on the short-term U.S. Treasury bill rate as a proxy for the rate of return on assets. (51)

The finding that only 27.8 percent of India’s illicit assets are held domestically support arguments that the desire to amass wealth illegally without attracting government attention is one of the primary motivations behind the cross-border transfer of illicit capital. (vii, 19)

In the post-reform period of 1991-2008, deregulation and trade liberalization accelerated the outflow of illicit money from the Indian economy. Opportunities for trade mispricing grew and expansion of the global shadow financial system—particularly island tax havens—accommodated the increased outflow of India’s illicit capital flight. (Introduction)

There is a statistical correlation between larger volumes of illicit flows and deteriorating income distribution. (35)

Tax evasion is a major component of the underground economy, which in turn is a primary driver of India’s illicit outflows. Expanding India’s tax base and improving tax collection has high potential to curtail illicit flows.

Illicit financial flows cannot be curtailed without the collaborative effort of both developing and developed countries. Economic reforms key to stemming the outflow of illicit money from India and the developing world in general include:

Dev Kar, the author of the report, utilized the World Bank Residual Model (CED) and a trade Mispricing Model based on IMF Direction of Trade statistics.

The Trade Mispricing Model compares a country’s recorded imports to what the world says it exported to that country; similarly, the country’s recorded exports are compared against world imports from that country. Import values are adjusted for the cost of freight and insurance before they are compared to exports. GFI’s estimates of trade mispricing are based on the gross excluding reversals (GER) method which tracks illicit outflows as a result of export under-invoicing and import over-invoicing.

The author identified the drivers of illicit flows from India using a block-recursive dynamic simulation model which incorporated macroeconomic factors (government deficits, inflation, and inflationary expectations) structural factors (increasing trade openness, faster rates of economic growth and impact of these on income distribution), and overall governance as captured by a measure of the underground economy.