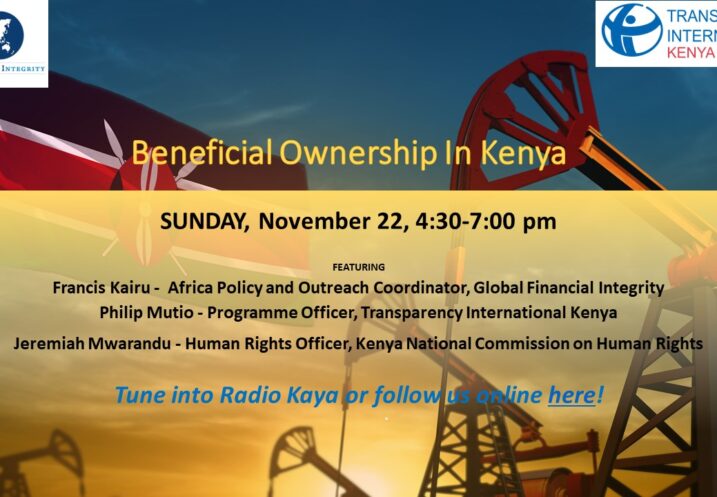 By Francis Kairu and Philip Mutio

Global Financial Integrity organized the second radio show in a series of 3 that discussed beneficial ownership in Kenya. The show was held on Kaya FM one of the leading stations along the coast of Kenya. GFI was joined by panelists from the Kenya National Commission on Human Rights (KNCHR) and Transparency International Kenya (TI-K). GFI was represented by Francis Kairu, the Africa Policy and Outreach coordinator while KNCHR was represented by Jeremiah Mwarandu a Regional Services Officer and Lawyer. TI-K was represented by Philip Mutio a programmes officer at TI-K.

Kairu highlighted that according to the amendments to the Companies Act, each company is required to maintain a register of its beneficial owners. A company’s beneficial owner is any natural person who:

Significant influence means participation in the finances and financial policies of a company without necessarily having full control over them. It is important for the country to know who the beneficial owners of entities are to secure the integrity of the financial system, deter the use of shell companies, align with global best standards and also help in enforcement of laws on corruption, money laundering and other financial crimes.

Mwarandu explained the linkages between beneficial ownership and human rights. Transnational criminal organizations often perpetuate human rights abuses using illicit wealth to shield themselves from accountability. Crimes such as human trafficking are used to derive illicit wealth which is then laundered through transactions made to conceal the real origin of the illicit funds. The provision of essential services by all arms of government is often hindered by lack of funds. It is almost impossible for the country to achieve a high level of respect for human rights if available resources are lost through illicit flows.  Further, listeners were also enlightened on the 16 days of activism and implored to take individual responsibility to observe and ensure protection of human rights. KNCHR shared its help-line to allow victims of human rights violations to lodge their complaints and or seek legal advice.

Philip from TI-K highlighted that corruption was a main way through which illicit funds were being generated in the country. Corruption also allowed those involved in deriving illicit funds to evade liability and continue concealing illicit wealth. Kenya has passed beneficial ownership laws because the government was also concerned about the proliferation of financial and economic crime. Philip highlighted that although the beneficial ownership register was not public it would have details such as full names, Identity card numbers, date of birth as well as Personal Identification Numbers (PIN). These details would be useful in identifying the real owners of companies and to track transactions during any investigation.

During the show, the team explored several cases such as the Gichuru and Okemo case, the Anglo leasing case and the Golden berg scandal. It was clear that companies were involved in all corruption cases and were used to move funds. In the Gichuru and Okemo case, finding out the beneficial owners of the companies helped in determining the source of the funds suspected to have been pilfered from government.

In total the station received 257 text messages during the timeframe of the show and was able to field questions from 16 callers. A profile of the text messages showed that 85% of the texts were related to the show therefore showing wide active listenership. The callers were from Kilifi, Kwale, Mombasa, Taita Taveta and Tana River counties. This represents coverage of 5 of the 6 coastal counties. The callers asked questions relating to the importance of beneficial ownership, what CSO’s could do support policy efforts as well as proposed remedies for pervasive corruption in the country. Most listeners also appreciated the ability to learn more about beneficial ownership in a simple relevant language.