HomePressNearly US$100 Billion Flowed Illegally through Myanmar from 1960 to 2013, Finds New GFI Report

Nearly US$100 Billion Flowed Illegally through Myanmar from 1960 to 2013, Finds New GFI Report 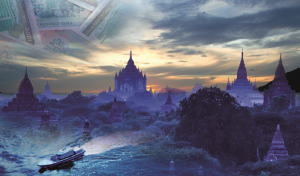 Underground Economy Averaged 55.1% of Country’s GDP; Drives and is Driven by Illicit Flows

Report Launch Event to Be Held at the National Press Club at 2pm EDT on Thursday, September 10th

Titled “Flight Capital and Illicit Financial Flows to and from Myanmar: 1960-2013,” the study finds that trade misinvoicing—the fraudulent over- and under-invoicing of trade transactions—accounted for the majority of the country’s illicit financial outflows (59.6 percent) and inflows (89.2 percent) over the 54-year period analyzed.

“Myanmar has a very serious problem with illicit financial flows, and curtailing them should be a priority for the government that forms following the forthcoming elections,” noted GFI President Raymond Baker, a longtime authority on financial crime. “Illicit flows have drained billions of dollars from Myanmar’s official economy; this money could have otherwise been used to help the nation’s economy grow.  Beyond the direct loss to the economy, these flows are driving the underground economy, fueling crime and corruption, and costing the government significant revenue.”

Authored by GFI Chief Economist Dev Kar and Junior Economist Joseph Spanjers, the study estimates that illicit financial flows from Myanmar totaled US$18.7 billion from 1960 through 2013, with annual average illicit outflows averaging 6.5 percent of the country’s GDP. Illicit inflows totaled a staggering US$77.7 billion over the 54-year period; nearly half of those inflows (in real terms) occurred during the last four years of the study, 2010-2013. On average, Myanmar’s illicit inflows are equivalent to 14.4 percent of its GDP.

“Illicit outflows drain capital from Myanmar’s economy, facilitate tax evasion, exacerbate inequality, and deplete domestic savings,” said Dr. Kar, who served as a senior economist at the International Monetary Fund before joining GFI.  “It is greatly concerning that illicit inflows have grown significantly in recent years, averaging under US$400 million per annum in the 1960s, they’re averaging over US$8 billion per year today.  Unless corrective actions are taken, the economic toll of these illicit flows will only continue to grow.”

Both the inward and outward illicit movements of money deprive the government of crucial tax revenue. By applying relevant tax rates on illicit flow figures, the report estimates lost tax revenue due to illicit flows and compares it to Myanmar’s public spending on health and education.

“Tax losses due to illicit flows have robbed the country of crucial public funds. The magnitude of this loss is not insignificant; it averaged 122-172 percent of health expenditures and 48-73 percent of education spending from 1960-2013,” explained Mr. Spanjers, the report’s co-author. “Even more troubling, approximately 30 percent of this tax loss occurred in the last four years of the study. This means that some individuals have been taking advantage of increased economic openness for personal gain, at the expense of the rest of the country.”

In addition to estimating illicit flows of capital to and from Myanmar, the study also estimates that broad capital flight—a combination consisting of both licit and illicit flows—amounted to US$35.9 billion in outflows between 1960 and 2013. Broad flight capital inflows stood at US$82.8 billion.

The report also found that the underground economy averaged 55.1 percent of official GDP over the 54-year period, increasing from an average of 49.3 percent in the 1960s to 66.1 percent in the 1980s before falling from 2008 through 2013, potentially as a result of increasing economic openness.

“Addressing the problem of capital flight and illicit flows is crucial to the policy reforms Myanmar is pursuing as it opens to the world,” stated Tom Cardamone, GFI’s Managing Director, who will launch the report at an event Thursday afternoon in Washington, DC.  “Illicit financial flows are a real and rapidly growing problem, as our research shows, one which requires serious attention by policymakers.”

GFI recommends a number of steps Myanmar’s next government can take to ameliorate the problem of illicit financial flows from the country revolving around two principles:

These steps include implementing a real-time world market pricing risk analysis system to curtail trade misinvoicing, making more meaningful progress on AML/CFT responsibilities, studying physical and technical smuggling routes to form the basis of an organized and effective program to curb these illegal transactions, and developing an internal review process that determines the highest priority areas for technical assistance.

Nevertheless, Dr. Kar cautioned that the methodology for estimating illicit flows is very conservative and that there are likely to be more illicit flows from Myanmar that are not captured by the estimates, particularly given its complex history with regards to international sanctions and drug trafficking.

“The estimates provided by our methodology are likely to be extremely conservative as they do not include trade misinvoicing in services, same-invoice trade misinvoicing, hawala transactions, and dealings conducted in bulk cash,” explained Dr. Kar.  “This means that a large amount of the proceeds of abusive transfer pricing between arms of the same multinational corporation as well as much of the earnings from drug trafficking, human smuggling, and other criminal activities—which are often settled in cash—are not included in these estimates.”

Global Financial Integrity will launch the report at a conference at the National Press Club in Washington, DC on Thursday, September 10, 2014 at 2pm local time.  The event will feature a brief presentation of the report and its findings by GFI Chief Economist Dr. Dev Kar, followed by a panel discussion with Vikram Nehru of the Carnegie Endowment for International Peace and Aaretti Siitonen of the Embassy of Finland and a question & answer period.

GFI hopes that the report and the conference will begin a constructive dialogue with Myanmar’s government about measures that can be taken to curtail illicit flows.

“We hope that this study will spur the Government of Myanmar to consider effective legislative and regulatory measures to curb the flow of illicit money from the country, thereby maximizing domestic resources for economic growth,” added Mr. Baker. “GFI’s goal is to work constructively in conjunction with government officials to curtail these harmful illicit flows.”

Funding for the new report, “Flight Capital and Illicit Financial Flows to and from Myanmar: 1960-2013,” was generously provided by the Government of Finland.