China’s regulatory body responsible for managing the country’s foreign exchange reserves (SAFE) announced last month that it was planning to increase enforcement and penalties associated with the abuse of trade payments to mask illicit inflows of foreign exchange. The Wall Street Journal reports that Chinese authorities have uncovered 1,076 instances of false reporting of export invoices by 112 companies, adding up to approximately $2.5 billion. Still, SAFE has not disclosed the severity of the problem nor how it would clamp down on such practices—leaving many questions to be answered. Allusions to “fishy” trade with Hong Kong were given, but specifics were lacking.

How exactly are traders using trade payments to circumvent controls on bringing foreign capital into China? One measurable way which Chinese regulators alluded to is a process known as “export over-invoicing”. This involves the deliberate falsification of export invoices to make it seem as if exporters are sending more goods out than they actually are. By doing this, an  exporter can smuggle in additional capital—under the guise of legitimate trade payments—before diverting the foreign capital (illegally) into other more lucrative  investments like bonds or real estate.

How big is this hole in China’s capital controls? Although no estimates from SAFE were provided, over-reported exports are easily detectable through a comparison of bilateral trade statistics. A comparison of China’s trade with Hong Kong shows that an alarming $101 billion of exports simply disappeared at the Hong Kong border in 2012 alone, with an additional $54 billion smuggled in during the first quarter of 2013. The cumulative amount of foreign exchange brought illicitly into China masked as trade payments from Hong Kong since the first quarter of 2006 adds up to an astounding $400 billion.

Putting this into perspective, the $101 billion of foreign exchange brought in through illicit exports represents about 40 percent of the $253 billion of legal net FDI that China received from abroad during the same year. Such large sums of money have the potential to be destabilizing, and are most likely being used to fuel further currency and housing speculation within the country. 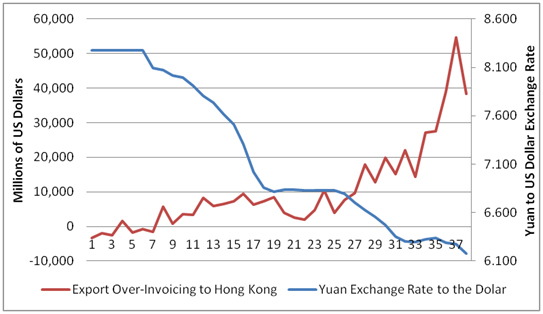 Worryingly, there also appears to be a direct correlation between the amount of hot money entering China through export over-invoicing and the US Treasury bond rate. As rates have declined in the US due to the Fed’s monetary stimulus that began in 2009, export over-invoicing has increased in lock-step.

Will the easing of monetary stimulus in the United States cause this hot money to quickly reverse its course? It’s very possible. A similar event happened in the 1997 crisis, when Alan Greenspan began increasing the federal funds rate following a rebound from the early-1990s recession in the United States. This combined with a strengthening US dollar contributed to investment fleeing Asian markets for greener pastures in a recovering US economy. 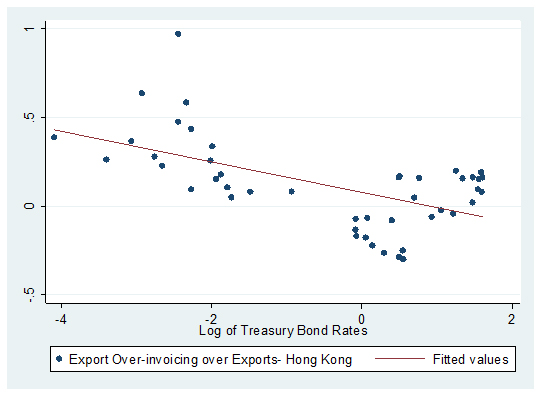 It is also unlikely that China will be able to effectively control these illicit outflows of capital if a repeat of the 1997 crisis does occur. A recent report by Global Financial Integrity—a Washington-based think tank—showed that China led the entire developing world in illicit financial outflows in the decade ending 2011. Illicit outflows from China have been on the decline since 2005, due mostly to the increase in hot money inflows described earlier, not to improved governance or macroeconomic performance.

While it is clear that China has had difficulty cracking down on illicit flows of capital, it can continue to strengthen enforcement by some simple transparency measures such as creating a public registry of corporate beneficial ownership information—as the UK recently announced that it will do—and by expanding its use of automatic cross-border exchange of tax information beyond the G20 to include non-G20 tax havens and developing nations.  Much of these illicit flows are facilitated by opacity in the global financial system. As the OECD noted in a report in late December, many of the richest countries in the world are themselves failing to tackle illicit financial flows through trade misinvoicing—not for a lack of technical ability, but due to a failure of political will.  China has the capacity to get a handle on this issue, and there’s no reason why they can’t take the lead.  After all, it’s developing and emerging economies like China that suffer the most from trade-based money laundering.

Brian LeBlanc is a Junior Economist at Global Financial Integrity, a Washington, DC-based research organisation studying the illicit flow of money in developing and emerging economies.