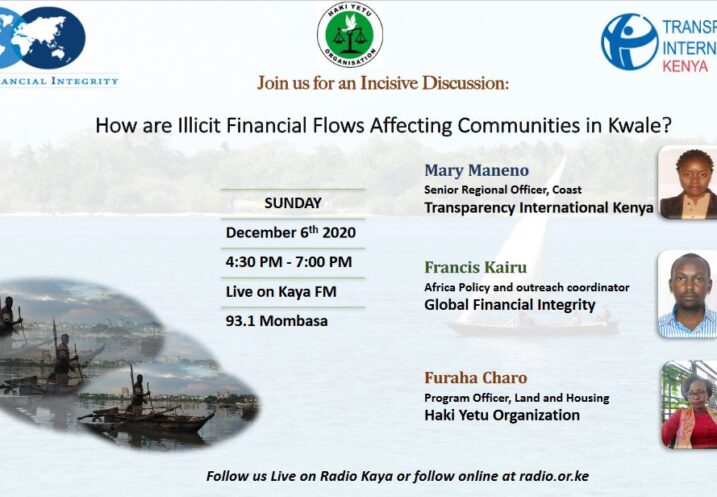 GFI jointly with Transparency International Kenya (TI-K) and Haki Yetu organized the third radio show in this series to discuss the impact the IFFs have had on Kwale County. TI-K was represented by Mary Maneno the Senior Regional Officer, Coast while Haki Yetu was represented by Furaha Charo the Programs Officer for Lands and Housing

The show sought to highlight the effects that illicit financial flows (IFFs) were having on the community in the coast region and specifically in Kwale. The panelists also analyzed how women and men were differently impacted by IFFs. The show addressed the following thematic areas:

Maneno spoke about the different issues women in Kwale were facing that could be directly attributed to lack of resources to address gender specific needs. Sexual and Gender Based Violence (SGBV) in Kwale was increasing and could be linked to corruption, human trafficking, drug abuse and exploitation of natural resources. All these are important factors in understanding the illicit financial flows value chain. When government acquires land for huge infrastructure projects or mining, the compensation often went to the men. This also adds to denial of land rights to women and predisposes them to SGBV.

Charo spoke about the link between corruption and the denial of rights among citizens. Those involved in illicit financial flows use the illicitly gained wealth to weaken governance systems. Consequently, those denied rights, as well as victims of abuse, are unable to get justice because the system is already corrupted. The county is also reeling from numerous incomplete public projects such as schools, water points, health centers, markets and public roads. All these crucial public installations are necessary to improve the overall quality of life for residents. Several surveys have also showed that water points, health centers and markets are crucial public infrastructure for women. This is due to the homemaking role that culturally is borne by women. Most stalled projects are linked directly to public funds that were allocated, disbursed but stolen. She highlighted that often these funds were laundered locally or stashed abroad in secret accounts contributing to illicit financial flows.

Kairu highlighted that currently, Kenya like most developing nations is plagued by illicit financial flows which affect it harder than developed nations. The inability of the country to finance crucial development agendas such as proper health care, eliminating child mortality, reducing deaths from major infectious diseases such as malaria and proliferation of huge public debt could be linked to illicit financial flows. Tax evasion also denied the government much needed revenue that could be used to address societal challenges. Counties like Kwale were especially suffering greatly for being unable to meet their revenue targets due to tax evasion.

He added that in order to create opportunities for economic growth, illicit financial flows must be eliminated in Kenya.

The panelists discussed several approaches that could help in mitigating the effects that IFFs were having in Kwale. One was to implement beneficial ownership legislation at the national level. Increased transparency in the management of public funds is also a crucial way of reducing pilferage. Enhanced investigation and prosecution of money laundering crimes in Kenya would also help to tame those benefiting from illicit financial flows.

The show received calls from listeners in all coastal counties Kilifi, Mombasa, Kwale, Tana River, Lamu and Taita Taveta. The bulk of callers were drawn from Kwale County. The team also had a caller from Tanzania who was following the show after seeing it advertised online. A caller sought to know how the government was responding to illicit financial flows. The panelists added that the government had spearheaded amendments to the companies Act to provide for beneficial ownership. The anticorruption agency was also actively pursuing funds and assets stashed abroad in its enforcement role against IFFs.

The studio also recorded 193 text messages during the duration of the show. The texts were mostly related to the show and posed questions as well as recommending the show organizers for choosing a relevant topic. The show was the last in a series of 3 held to build advocacy around beneficial ownership and illicit financial flows.