Trade misinvoicing has impacted emerging market and developing countries for decades by siphoning capital out of economies and denying governments vitally important domestic resources. This phenomenon is utilized for the purpose of 1) manipulating VAT taxes, customs duties, income taxes and other sources of revenue for Governments, and 2) shifting money into or out of countries in a manner that cannot be easily detected.

This reality may be manifested through:

The drainage of money out and the loss of revenue in emerging market and developing countries is in the hundreds of billions of dollars annually.

Solutions for Inspired Economies is a three-part program addressing this reality. Each part may be undertaken individually, or simultaneously, or in any order. The three components are:

The following materials present details on each of these components of the Solutions for Inspired Economies package.

Utilizing these two sources of data, GFI produces a thorough analysis of the magnitude of a country’s misinvoicing problem. We can determine how much of the problem stems from import over- or under-invoicing or export under- or over-invoicing. With a sufficiently long time series of data, we are often able to measure how economic and political events have influenced misinvoicing. Across shorter time periods we can estimate what revenues have been lost to Governments. And we are often able to measure the relationship of illicit financial flows through trade misinvoicing to other factors such as foreign direct investment, tax policy, social expenditures, and inequality.

The Economic Analysis provides a useful first step in determining how a country may progress in curtailing its trade misinvoicing problem.

Global Financial Integrity’s (GFI’s) team of experts works in a dialogue on a confidential basis with senior officials of Governments to consider specific policy measures that can be undertaken to curtail the reality of trade misinvoicing and improve domestic resource mobilization. GFI’s team includes experts in economics, law, customs, trade, banking, accounting, auditing, tax, and anti-money laundering. We request that Government counterpart teams be drawn from ministries of finance, trade, economic development, and resources as appropriate and include officials from revenue authorities, the central bank, customs, ports, intelligence units, and such other organs of Government as are deemed appropriate.

First Meeting: A two-day discussion held in Washington D.C., addressing issues surrounding the curtailment of illicit financial flows through trade misinvoicing. Among the issues addressed are the following:

Following the two-day discussion, GFI provides to the Government a summary of the talks and policy issues and recommendations for further consideration by the Government.

Second Meeting: Upon returning home, the Government expert team holds meetings, including with additional advisory officials as may be needed, to consider the points and measures emerging from the first meeting. This process may proceed for three to six months.

When the host country is ready, GFI’s expert team travels to the country for a second round of two-day meetings. In these discussions, Government officials present their appraisal of the feasibility of implementing various policy measures to curtail trade misinvoicing and elaborate on such steps as may have already been taken. GFI reacts to the successes achieved and issues remaining.

Follow Up: After the conclusion of the Second Meeting, GFI remains available for an extended period of time for further exchange of views on measures that can be taken to curtail illicit financial flows due to trade misinvoicing. In addition, GFI advises on emerging new concepts and practices that may be helpful to the host country.

GFI approaches the whole of this four-step process in confidence. Governments are free to publicize the effort at their discretion.

GFTrade is a proprietary risk assessment application that enables customs officials to determine if goods are priced outside typical ranges for comparable products. The system provides officials with real-time price comparisons for goods in the port with price ranges for the same product, traded between the same two trading partners during the previous year, based on global trade information which can be used to determine if further investigation is warranted. The system is fed by the most recent official trade data from China, the United States, EU28, and Japan and provides the ability to search for goods values based on thousands of Harmonized System (HS) codes. GFTrade is an essential tool to assist governments in maximizing domestic resource mobilization and tackling trade misinvoicing.

Trade misinvoicing—which involves the deliberate falsification of the value or volume of an international commercial transaction—is the largest component of illicit financial flows measured by Global Financial Integrity (GFI), which was close to US$1 trillion for developing countries in 2015. GFI estimates that on average over 80 percent of such illicit financial outflows were due to the fraudulent misinvoicing of trade.

By fraudulently manipulating the price, quantity, or quality of a good or service on an invoice submitted to customs, criminals can easily and quickly shift substantial sums of money across international borders. Trade misinvoicing occurs in all countries and for various reasons including to evade tax and/or customs duties, to launder the proceeds of crime, to circumvent currency controls, and to hide profits offshore, among others. In developed nations revenue losses due to trade misinvoicing and the ramifications of trade-based money laundering—including its possible connection to terrorist financing—is significant. In developing and emerging market nations trade misinvoicing can drastically undermine domestic resource mobilization efforts which weakens a government’s ability to build the economy and alleviate poverty. Given that rates of tax collection in developing nations tend to be well below those seen in developed nations, the loss of revenue due to trade misinvoicing has a corrosive impact on development.

An example of how the system works is seen in the screen shot below. In this hypothetical case, a customs official in Durban, South Africa can compare the price of hydraulic machinery imported from the United States against a range of pricing for the same product imported from the U.S. over the past 12 months, based on information in the database. To begin, the official will input an HS Code for a specific product (i.e. hydraulic machinery – 842129) and select from the search results the commodity that most closely matches the information on the shipment’s customs document.

Having selected a commodity, the user will be able to compare the range of previous pricing from a specific country against a live trade invoice. To do so, a customs official will input the total value of the shipment he/she is processing and GFTrade will return a visual comparison of the unit price of that shipment with the average price for the previous 12 months. For the purposes of this hypothetical example we have inputted a unit price of $12 per unit. This is visualized as follows: 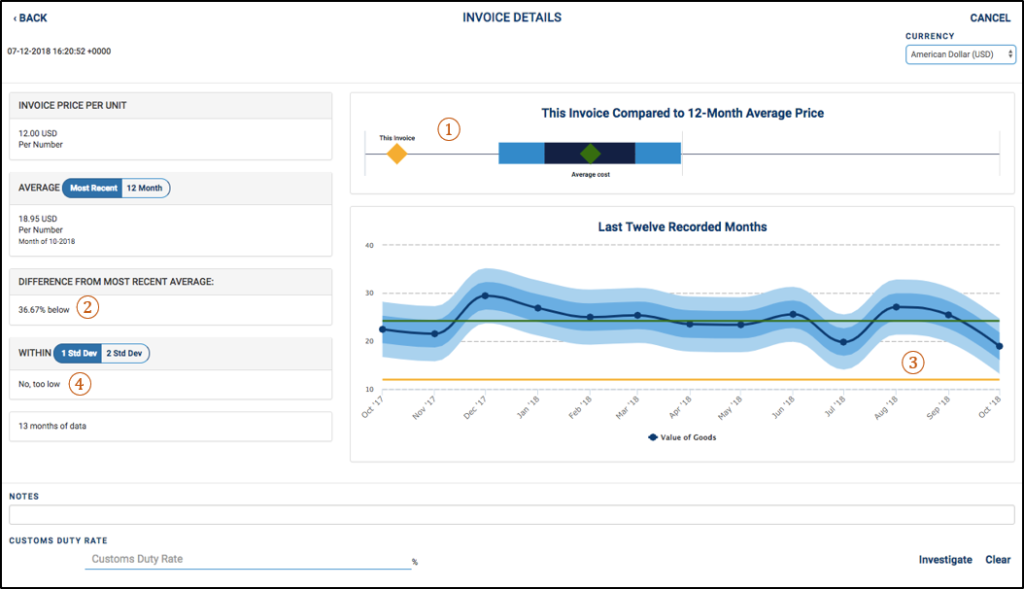 The figure above provides four ways to determine if a product in the port is priced within a typical range. The first way to make a determination is seen at the top of the screen where the yellow diamond indicating “this invoice” is compared to current average pricing using a plot line. The greater the distance to the left of the diamond representing the “average cost” shows the degree of under-pricing and the greater the distance to the right of that point indicates the degree of overpricing. In this case, the yellow diamond indicating “this invoice” is well to the left of the 12-month average price (green diamond) thereby indicating that this invoice price is lower than the usual range of prices for this product. The second way to make this determination is seen to the left of the screen under the heading “Difference With Most Recent Average” which notes that the current invoice value is “36.67% below” most recent monthly average price ($18.95).

Section 3 – Users and Use Environments
GFTrade can be utilized by the following departments:

Section 4 – Data Sets Incorporated
GFTrade incorporates official data from 31 countries, including eight of the world’s 10 largest trade economies (by volume): China, United States, Germany, Japan, France, United Kingdom, the Netherlands, and Italy. The database is updated monthly with official government statistics from all 31 countries. These updates occur automatically with no technical requirements by the end-user. To ensure maximum accuracy in average pricing, goods in are sorted by the global standard 6-digit HS codes with ability to use 8-, 9-, and 10-digit HS codes as well.

For more information or a demonstration of GFTrade, contact President and CEO Tom Cardamone at [email protected]